The Book of Delight and Other Papers by Israel Abrahams was first published in 1912. Chapters include: The Book of Delight; A Visit to Hebron; The Solace of Books; Medieval Wayfaring; The Fox's Heart; Marriages are Made in Heaven; Hebrew Love Songs; and, A Handful of Curiousities.

This book has 177 pages in the PDF version, and was originally published in 1912.

Excerpt from 'The Book of Delight and Other Papers'

Joseph Zabara has only in recent times received the consideration justly due to him. Yet his "Book of Delight," finished about the year 1200, is more than a poetical romance. It is a golden link between folk-literature and imaginative poetry. The style is original, and the framework of the story is an altogether fresh adaptation of a famous legend. The anecdotes and epigrams introduced incidentally also partake of this twofold quality. The author has made them his own, yet they are mostly adapted rather than invented. Hence, the poem is as valuable to the folklorist as to the literary critic. For, though Zabara's compilation is similar to such well-known models as the "Book of Sindbad," the Kalilah ve-Dimnah, and others of the same class, yet its appearance in Europe is half a century earlier than the translations by which these other products of the East became part of the popular literature of the Western world. At the least, then, the "Book of Delight" is an important addition to the scanty store of the folk-lore records of the early part of the thirteenth century. The folk-lore interest of the book is, indeed, greater than was known formerly, for it is now recognized as a variant of the Solomon-Marcolf legend. On this more will be said below,

As a poet and as a writer of Hebrew, Joseph Zabara's place is equally significant. He was one of the first to write extended narratives in Hebrew rhymed prose with interspersed snatches of verse, the form invented by Arabian poets, and much esteemed as the medium for story-telling and for writing social satire. The best and best-known specimens of this form of poetry in Hebrew are Charizi's Tachkemoni, and his translation of Hariri. Zabara has less art than Charizi, and far less technical skill, yet in him all the qualities are in the bud that Charizi's poems present in the fullblown flower. The reader of Zabara feels that other poets will develop his style and surpass him; the reader of Charizi knows of a surety that in him the style has reached its climax.

Of Joseph Zabara little is known beyond what may be gleaned from a discriminating study of the "Book of Delight." That this romance is largely autobiographical in fact, as it is in form, there can be no reasonable doubt. The poet writes with so much indignant warmth of the dwellers in certain cities, of their manner of life, their morals, and their culture, that one can only infer that he is relating his personal experiences. Zabara, like the hero of his romance, travelled much during the latter portion of the twelfth century, as is known from the researches of Geiger. He was born in Barcelona, and returned there to die. In the interval, we find him an apt pupil of Joseph Kimchi, in Narbonne. Joseph Kimchi, the founder of the famous Kimchi family, carried the culture of Spain to Provence; and Joseph Zabara may have acquired from Kimchi his mastery over Hebrew, which he writes with purity and simplicity. The difficulties presented in some passages of the "Book of Delight" are entirely due to the corrupt state of the text. Joseph Kimchi, who flourished in Provence from 1150 to 1170, quotes Joseph Zabara twice, with approval, in explaining verses in Proverbs. It would thus seem that Zabara, even in his student days, was devoted to the proverb-lore on which he draws so lavishly in his maturer work.

Dr. Steinschneider, to whom belongs the credit of rediscovering Zabara in modern times, infers that the poet was a physician. There is more than probability in the case; there is certainty. The romance is built by a doctor; there is more talk of medicine in it than of any other topic of discussion. Moreover, the author, who denies that he is much of a Talmudist, accepts the compliment paid to him by his visitor, Enan, that he is "skilled and well-informed in the science of medicine." There is, too, a professional tone about many of the quips and gibes in which Zabara indulges concerning doctors. Here, for instance, is an early form of a witticism that has been attributed to many recent humorists. "A philosopher," says Zabara, "was sick unto death, and his doctor gave him up; yet the patient recovered. The convalescent was walking in the street when the doctor met him. 'You come,' said he, 'from the other world.' 'Yes,' rejoined the patient, 'I come from there, and I saw there the awful retribution that falls on doctors; for they kill their patients. Yet, do not feel alarmed. You will not suffer. I told them on my oath that you are no doctor.'"

Again, in one of the poetical interludes (found only in the Constantinople edition) occurs this very professional sneer, "A doctor and the Angel of Death both kill, but the former charges a fee." Who but a doctor would enter into a scathing denunciation of the current system of diagnosis, as Zabara does in a sarcastic passage, which Erter may have imitated unconsciously? And if further proof be needed that Zabara was a man of science, the evidence is forthcoming; for Zabara appeals several times to experiment in proof of his assertions. And to make assurance doubly sure, the author informs his readers in so many words of his extensive medical practice in his native place.

If Zabara be the author of the other, shorter poems that accompany the "Book of Delight" in the Constantinople edition, though they are not incorporated into the main work, we have a further indication that Zabara was a medical man. There is a satirical introduction against the doctors that slay a man before his time. The author, with mock timidity, explains that he withholds his name, lest the medical profession turn its attention to him with fatal results. "Never send for a doctor," says the satirist, "for one cannot expect a miracle to happen." It is important, for our understanding of another feature in Zabara's work, to observe that his invective, directed against the practitioners rather than the science of medicine, is not more curious as coming from a medical man, than are the attacks on women perpetrated by some Jewish poets (Zabara among them), who themselves amply experienced, in their own and their community's life, the tender and beautiful relations that subsist between Jewish mother and son, Jewish wife and husband. 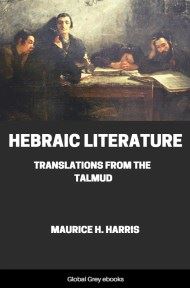 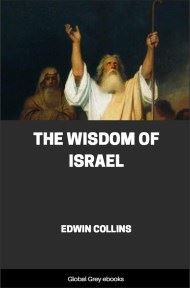 The Wisdom of Israel 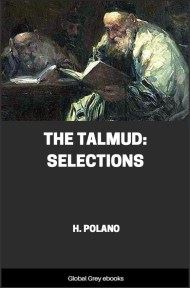