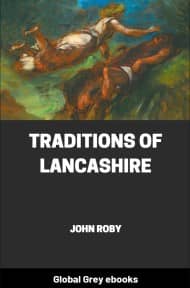 Traditions of Lancashire is John Roby's influential, two-volume study on English folklore. Popular at the time, his work is now seen to be viewed with caution, given his propensity to rewrite folk stories into something he deemed more refined. Nethertheless, his study does contain important data for folklorists. Volume One chapters include: Sir Tarquin; The Goblin Builders; Mab's Cross; The Prior Of Burscough; The Eagle And Child; The Black Knight Of Ashton; Fair Ellen Of Radcliffe; The Abbot Of Whalley; Sir Edward Stanley; George Marsh, The Martyr; Dr Dee, The Astrologer; The Seer; The Earl Of Tyrone; Hoghton Tower; The Lancashire Witches; Siege Of Lathom; Raven Castle; The Phantom Voice; The Bar-Gaist; The Haunted Manor-House; Clitheroe Castle; and, The Grey Man Of The Wood. Volume Two chapters include: The Fairies' Chapel; The Luck Of Muncaster; The Peel Of Fouldrey; A Legend Of Bewsey; The Blessing; The Dule Upo' Dun; Windleshaw Abbey; Clegg Hall; The Mermaid Of Martin Meer; George Fox; The Demon Of The Well; The Sands; The Ring And The Cliff; The Dead Man's Hand; The Lost Farm; The Maid's Stratagem; The Skull House; Rivington Pike; Mother Red-Cap; The Death-Painter; and, The Crystal Goblet.

This book has 685 pages in the PDF version, and was originally published in 1872.

Production notes: This ebook of Traditions of Lancashire was published by Global Grey in 2021.