Basque Legends by Wentworth Webster is a collection of mythology and folklore from the Basque people, an ethnic group from Spain. Chapters include: The Tartaro; Errua, The Madman; The Three Brothers, The Cruel Master, And The Tartaro; The Tartaro and Petit Perroquet; The Grateful Tartaro and the Heren-Suge; The Seven-Headed Serpent; The Serpent in the Wood; Acheria, The Fox; The Ass and the Wolf; Basa-Jauna, The Wild Man; The Servant at the Fairy's; The Fairy in the House; The Pretty But Idle Girl; The Devil's Age; The Fairy-Queen Godmother; The Witches at the Sabbat; The Witches and the Idiots; The Witch and the New-Born Infant; The Changeling; The Young Schoolboy; The Son Who Heard Voices, and many more. Also includes an essay on the Basque language and some Basque poetry.

This book has 317 pages in the PDF version, and was originally published in 1879.

THE study of the recent science of Comparative Mythology is one of the most popular and attractive of minor scientific pursuits. It deals with a subject-matter which has interested most of us at one period of our lives, and turns the delight of our childhood into a charm and recreation for maturer age. Nor is it without more useful lessons. In it we see more clearly than perhaps elsewhere the reciprocal influence, which none can wholly escape, of words and language upon thought, and again of thought and fancy upon words and language; how mere words and syllables may modify both conception and belief; how the metaphor, which at first presented an object more clearly and vividly to the mind than any more direct form of speech could do, soon confuses and at last wholly distorts the original idea, and buries its meaning under a new and foreign superstructure. We may mark here, too, by numerous examples, how slowly the human mind rises to the conception of any abstract truth, and how continually it falls back upon the concrete fact which it is compelled to picture to itself in order to state in words the simplest mental abstraction. The phrase, "The dawn flies before the sun," passing into the myth of Daphne and Apollo, is a lesson in psychology no less than in philology and in comparative mythology.

Now, both the interest and the value of these studies are enhanced in proportion as they become complete. Our conclusions approach nearer to certainty, and will gradually pass from theory to demonstration, as we find the same legends and modes of thought and expression on natural phenomena constantly reappearing among the most distant and the most isolated peoples, in languages which in their complex forms tell of the infancy of human speech, and also in those whose worn-down frame speaks of the world's old age.

Of the peoples now settled in Western Europe, the Basques are those which are the most separate from other populations; distinct in language, they represent, in a more or less mixed state, some older stratum of European ethnology. Their language, too, as regards the mass of the people, is still practically unwritten. Here there is a chance of finding legends in a purer and older form than among any other European people; and in what they have borrowed from others, we may have an almost unique crucial test of the time which it takes for such traditions to pass orally from people of one language to another and totally different one. None of these legends have been published or even noticed till within the last two years, when M. d'Abbadie read the legend of the Tartaro, before the Société des Sciences et des Arts de Bayonne, and M. Cerquand his "Légendes et Récits Populaires du Pays Basque," before the sister society at Pau.

Of course, we must expect to find such legends very much altered, and in a state of almost inextricable confusion, and this not only through forgetfulness, and through the lapse of time since their origin, not only by the influence of a total change of religion, but they are also mingled and interpenetrated with totally new ideas; the old and the new will be found side by side in striking and sometimes grotesque contrast. As in Campbell's "Tales of the West Highlands," personages of mythical antiquity go to kirk, and indulge in other decidedly post-Reformation practices, so in these Basque tales the reader must not be startled by the introduction of maize and tobacco, of cannon and gunpowder, of dances at the mairie, and the use of the guillotine, in stories which, perhaps, originally told of the movements of the stars, of the wars of the forces of the atmosphere, of the bright beauty of the rising, or of the glowing glory of the setting sun. The body is the same in all ages, but the dress varies with the changing fashions. To borrow an illustration from a slightly older science, this is not a simple case of contorted and overlying strata to be restored to their original order, but rather of strata worn down, reconstructed, and deposited anew, and even modified in their latest stage by the interference of human action. And thus our problem becomes an exceedingly complex and difficult one, and our readers must not be disappointed if our conclusions are not so clear and positive as might be wished. The present is merely a tentative, and not, in any sense, a final essay towards its solution.

How are these legends told now, and how have they been preserved? They are told by the Basque peasants, either when neighbours meet--after the fashion made familiar to us by American novelists in the "Husking Bee"--for the purpose of stripping the husks from the ears of maize, an operation generally performed in one or two long sessions; or at the prolonged wedding and other feasts, of which we have evidence in the tales themselves, or else in the long nights round the wintry hearth of their lonely dwellings. For it is one of the charms of the Basque land that the houses are scattered all over the face of the country, instead of being collected into crowded villages; and it is, perhaps, to this fact chiefly that we owe the preservation of so much old-world lore, and of primitive ideas, among this people. The reader must not be surprised at the length of some of our specimens. The details of the incidents of the longest are religiously preserved, and, as told at home, they are probably more lengthy (as anyone will understand who has ever taken anything down from recitation) than as here given. Many an unlettered Basque peasant could serve an irritable stranger as Glendower did Hotspur, when he kept him "at least nine hours in reckoning up the several devils' names that were his lackeys." 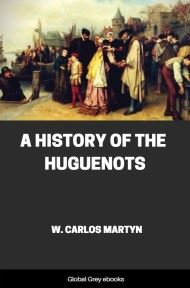 A History of the Huguenots