A Peep at the Pixies, or Legends of the West 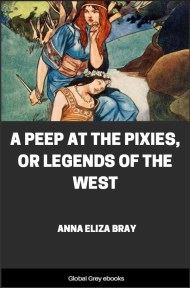 A collection of six fairy tales. From the Introduction: 'You have read, my young friends, in your History of England, some accounts of the ancient Britons, and of the Druids, who were priests and judges among them. The Druids lived very much together, and formed schools, in which they taught such arts and learning as they were acquainted with; and they studied much the stars on heights and open places, such as those on Dartmoor, where a great many of them dwelt. They said it was unlawful to perform the rites and ceremonies of their religion within a covered temple or under a roof of any kind.'

This book has 115 pages in the PDF version, and was originally published in 1854.

Production notes: This ebook of A Peep at the Pixies, or Legends of the West was published by Global Grey in 2018.