North Cornwall Fairies and Legends, first published in 1906, is a collection of folk-lore from Cornwall. Tales include: The Adventures of a Piskey in Search of his Laugh; The Legend of the Padstow Doombar; The Little Cake-bird; The Impounded Crows; The Piskeys’ Revenge; The Old Sky Woman; Reefy, Reefy Rum; The Little Horses and Horsemen of Padstow; How Jan Brewer was Piskey-laden; The Small People’s Fair; The Piskeys who did Aunt Betsy’s Work; The Piskeys Who carried their Beds; and, The Fairy Whirlwind.

This book has 65 pages in the PDF version, and was originally published in 1906.

The moon was shining softly down on the grey ruins of King Arthur’s Castle by the Tintagel sea, and on hundreds of little Piskeys dancing in a great Piskey-ring on the mainland, known as Castle Gardens.

In the centre of the ring stood a Little Fiddler, fiddling away with all his might, keeping time with his head and one tiny foot.

The faster he played and flung out the merry tune on the quiet moonlit night, the faster the Piskeys danced. As they danced they almost burst their sides with laughter, and their laughter and the music of the Little Fiddler was distinctly heard by an old man and his wife, who then lived in the cottage near the castle.

One little Piskey, somewhat taller than a clothes-peg, was the best dancer there, and his laugh was the merriest. He was dancing with a Piskey about his own size, who could hardly keep step with his twinkling feet.

As the Piskeys careered round and round the Piskey-ring, the tiny chap who was the best dancer, and had the merriest laugh, suddenly stopped laughing, and his little dancing feet gave under him, and down he went with a crash, dragging his little companion with him. Before they could pick themselves up, the Piskeys who were coming on behind, not seeing the two sprawling on the ring, fell on them, and in another moment Little Fiddler Piskey saw a moving heap of green-coated little bodies and a brown tangle of tiny hands and feet.

So amazed was he at such an unusual sight that he stopped fiddling, and let his fiddle slip out of his hand unnoticed on the grass.

When the Little Men had picked themselves up, except the one who had caused the mishap, they began to pitch into him for tumbling and causing them to tumble, when something in his tiny face made them stop.

‘What made you go down on your stumjacket like that when you were dancing so beautifully?’ asked a Piskey not unkindly.

‘I don’t know,’ he answered, looking up at his little brother Piskey with a strange expression in his face, which was pinched and drawn, and pale as one of their own Piskey-stools; and instead of a laugh in his dark little eyes there was misery and woe.

The strange expression in his eyes quite frightened the Piskeys, and one said: ‘What is the matter with you? You are looking worse than a cat in a fit.’

‘Am I?’ said the poor little Piskey. ‘I am feeling very queer. It was a queerness that made me fall on my little stumjacket. Am I ill like those great men and women creatures we sometimes entice into the bogs with Piskey-lights?’

‘We have never heard of a Piskey getting ill or sick,’ said a little brown Piskey, ‘have we?’ turning to speak to the Little Fiddler, who had come over to his companions, bringing his fiddle with him.

‘I most certainly haven’t,’ answered the Little Fiddler.

‘Then what is the matter with me, if I’m not sick?’ asked the little Piskey who was looking so queer.

‘Perhaps Granfer Piskey will be able to tell you, for I can’t,’ said the Tiny Fiddler.

‘Where is Granfer Piskey?’ asked the poor little sufferer. ‘I am afraid I am getting worse, for all the dance has left my legs.’

‘So he is,’ said all the other Piskeys, sending their glance in that direction, where, on the edge of a beetling cliff facing Castle Gardens, stood a tiny old man, with a white beard flowing down to his bare little feet. He was dressed, as were all the other Piskeys, in a bright green coat and a red stocking cap.

He disappeared into a Piskey-hole the Piskeys had dug in the cliff, which led down into an underground passage between the Island and the mainland, and very soon he reappeared from another hole in Castle Gardens, a few feet from where the little Piskeys were anxiously awaiting him.

‘Why are you not fiddling, dancing and laughing?’ asked the little Whitebeard, winking his eyes on the silent little Piskey crowd, standing near their little brother Piskey who was looking so queer. ‘You are wasting precious time standing here doing nothing. Before a great while the moon will have set over Trevose, and the time for merry-making and high-jinks will be over,’ he added, as not a Piskey spoke.

‘We are not fiddling, dancing and laughing because of something that has befallen our little brother,’ said the Tiny Fiddler at last, pointing to the poor little Piskey who had raised himself to a sitting position and was seated on the Piskey-ring.

‘He is a rum-looking little customer, sure ’nough,’ said the old Whitebeard, glancing in the direction of the place where the Little Fiddler pointed. ‘What is the matter with him?’

‘That is what we want to know,’ answered the Little Fiddler. ‘Come and have a closer look at him, Granfer Piskey;’ and Granfer Piskey came.

‘What is the matter with him?’ asked one of the Piskeys when the Whitebeard had stared down a minute or more on the little atom of misery sitting humped up on the edge of the great green ring like a toad on a hot shovel. ‘You are so old and wise, you will be able to tell us what ails him, if anybody can. He thinks he is sick like the big people we lead a fine dance round the fields and commons sometimes,’ as Granfer Piskey stood stock-still before the little afflicted Piskey, winking and blinking and solemnly shaking his head. 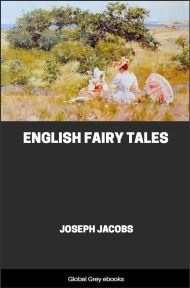 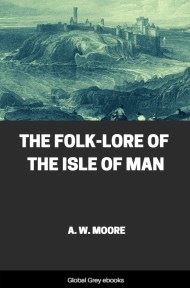 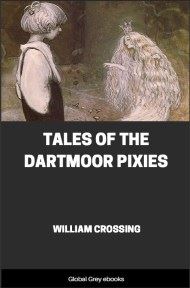 Tales of the Dartmoor Pixies