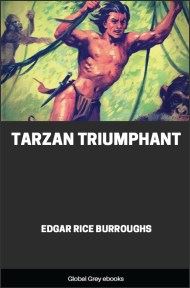 This is the fifteenth book in the Tarzan Series. Backed by Chief Muviro and his faithful Waziri warriors, Tarzan faces Soviet agents seeking revenge and a lost tribe descended from early Christians practicing a bizarre and debased religious cult. Fun fact: Soviet dictator Joseph Stalin is used as a minor character in the novel, though he remains in Moscow and does not personally take part in the action unfortunately.

This book has 232 pages in the PDF version, and was originally published in 1932.

Production notes: This ebook of Tarzan Triumphant was published by Global Grey in 2018.