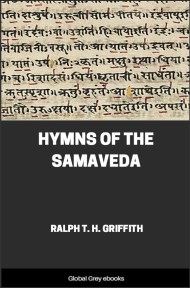 The Samaveda are part of the ancient Hindu scriptures, the earliest parts of which are believed to date from 1700 BC. They are the third of the four vedas, the others being the Rig Veda, Yajur Veda, and Atharva Veda.

This book has 195 pages in the PDF version, and was originally published in 1895.

Production notes: This ebook of Hymns of the Samaveda was published by Global Grey in 2019.