The Bhagavad Gita is technically part of Book 6 of the Mahabharata, although it is known to be a later accretion to the saga, which stands on its own merits. It is a dialog between the God Krishna and the hero Arjuna, taking place in a timeless moment on the battlefield before the climactic struggle between good and evil. The Gita is a classic summary of the core beliefs of Hinduism.

This book has 83 pages in the PDF version, and was originally published in 1885.

Excerpt from 'The Bhagavad Gita'

Dhritirashtra. Ranged thus for battle on the sacred plain-
On Kurukshetra- say, Sanjaya! say
What wrought my people, and the Pandavas?
Sanjaya. When he beheld the host of Pandavas,
Raja Duryodhana to Drona drew,
And spake these words: "Ah, Guru! see this line,
How vast it is of Pandu fighting-men,
Embattled by the son of Drupada,
Thy scholar in the war! Therein stand ranked
Chiefs like Arjuna, like to Bhima chiefs,
Benders of bows; Virata, Yuyudhan,
Drupada, eminent upon his car,
Dhrishtaket, Chekitan, Kasi's stout lord,
Purujit, Kuntibhoj, and Saivya,
With Yudhamanyu, and Uttamauj
Subhadra's child; and Drupadi's;- all famed!
All mounted on their shining chariots!
On our side, too,- thou best of Brahmans! see
Excellent chiefs, commanders of my line,
Whose names I joy to count: thyself the first,
Then Bhishma, Karna, Kripa fierce in fight,
Vikarna, Aswatthaman; next to these
Strong Saumadatti, with full many more
Valiant and tried, ready this day to die
For me their king, each with his weapon grasped,
Each skilful in the field. Weakest- meseems-
Our battle shows where Bhishma holds command,
And Bhima, fronting him, something too strong!
Have care our captains nigh to Bhishma's ranks
Prepare what help they may! Now, blow my shell!"

Then, at the signal of the aged king,
With blare to wake the blood, rolling around
Like to a lion's roar, the trumpeter
Blew the great Conch; and, at the noise of it,
Trumpets and drums, cymbals and gongs and horns
Burst into sudden clamour; as the blasts
Of loosened tempest, such the tumult seemed!
Then might be seen, upon their car of gold
Yoked with white steeds, blowing their battle-shells,
Krishna the God, Arjuna at his side:
Krishna, with knotted locks, blew his great conch
Carved of the "Giant's bone;" Arjuna blew
Indra's loud gift; Bhima the terrible-
Wolf-bellied Bhima- blew a long reed-conch;
And Yudhisthira, Kunti's blameless son,
Winded a mighty shell, "Victory's Voice;"
And Nakula blew shrill upon his conch
Named the "Sweet-sounding," Sahadev on his
Called "Gem-bedecked," and Kasi's Prince on his.
Sikhandi on his car, Dhrishtadyumn,
Virata, Satyaki the Unsubdued,
Drupada, with his sons, (O Lord of Earth!)
Long-armed Subhadra's children, all blew loud,
So that the clangour shook their foemen's hearts,
With quaking earth and thundering heav'n.
Then 'twas-
Beholding Dhritirashtra's battle set,
Weapons unsheathing, bows drawn forth, the war
Instant to break- Arjun, whose ensign-badge
Was Hanuman the monkey, spake this thing
To Krishna the Divine, his charioteer:
"Drive, Dauntless One! to yonder open ground
Betwixt the armies; I would see more nigh
These who will fight with us, those we must slay
To-day, in war's arbitrament; for, sure,
On bloodshed all are bent who throng this plain,
Obeying Dhritirashtra's sinful son." 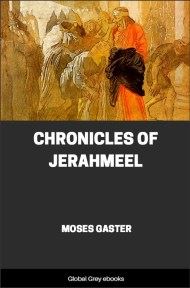 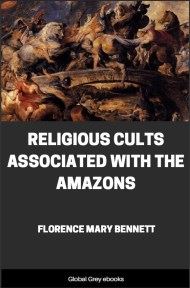 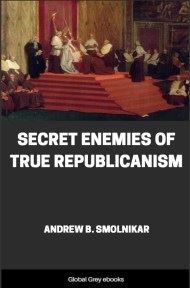 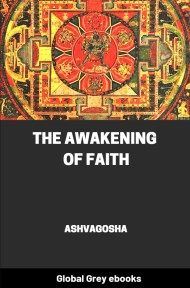 The Awakening of Faith 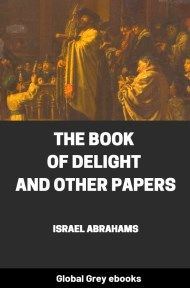