At the Earth's Core is a 1914 fantasy novel by Edgar Rice Burroughs, the first in his series about the fictional "hollow earth" land of Pellucidar. David Innes is a mining heir who finances the experimental "iron mole," an excavating vehicle designed by his elderly inventor friend Abner Perry. In a test run, they discover the vehicle cannot be turned, and it burrows 500 miles into the Earth's crust, emerging into the unknown interior world of Pellucidar. This strange world is inhabited by prehistoric creatures of all geological eras, and dominated by the Mahars, a species of flying reptile both intelligent and civilized, but which enslaves and preys on the local stone-age humans.

№ 1 in the Pellucidar series.

This book has 131 pages in the PDF version, and was originally published in 1914.

Excerpt from 'At the Earth’s Core'

I WAS BORN IN CONNECTICUT ABOUT THIRTY YEARS ago. My name is David Innes. My father was a wealthy mine owner. When I was nineteen he died. All his property was to be mine when I had attained my majority—provided that I had devoted the two years intervening in close application to the great business I was to inherit.

I did my best to fulfil the last wishes of my parent—not because of the inheritance, but because I loved and honored my father. For six months I toiled in the mines and in the counting-rooms, for I wished to know every minute detail of the business.

Then Perry interested me in his invention. He was an old fellow who had devoted the better part of a long life to the perfection of a mechanical subterranean prospector. As relaxation he studied paleontology. I looked over his plans, listened to his arguments, inspected his working model—and then, convinced, I advanced the funds necessary to construct a full-sized, practical prospector.

I shall not go into the details of its construction—it lies out there in the desert now—about two miles from here. Tomorrow you may care to ride out and see it. Roughly, it is a steel cylinder a hundred feet long, and jointed so that it may turn and twist through solid rock if need be. At one end is a mighty revolving drill operated by an engine which Perry said generated more power to the cubic inch than any other engine did to the cubic foot. I remember that he used to claim that that invention alone would make us fabulously wealthy—we were going to make the whole thing public after the successful issue of our first secret trial—but Perry never returned from that trial trip, and I only after ten years.

I recall as it were but yesterday the night of that momentous occasion upon which we were to test the practicality of that wondrous invention. It was near midnight when we repaired to the lofty tower in which Perry had constructed his "iron mole" as he was wont to call the thing. The great nose rested upon the bare earth of the floor. We passed through the doors into the outer jacket, secured them, and then passing on into the cabin, which contained the controlling mechanism within the inner tube, switched on the electric lights.

Perry looked to his generator; to the great tanks that held the life-giving chemicals with which he was to manufacture fresh air to replace that which we consumed in breathing; to his instruments for recording temperatures, speed, distance, and for examining the materials through which we were to pass.

He tested the steering device, and overlooked the mighty cogs which transmitted its marvelous velocity to the giant drill at the nose of his strange craft.

Our seats, into which we strapped ourselves, were so arranged upon transverse bars that we would be upright whether the craft were ploughing her way downward into the bowels of the earth, or running horizontally along some great seam of coal, or rising vertically toward the surface again.

At length all was ready. Perry bowed his head in prayer. For a moment we were silent, and then the old man's hand grasped the starting lever. There was a frightful roaring beneath us—the giant frame trembled and vibrated—there was a rush of sound as the loose earth passed up through the hollow space between the inner and outer jackets to be deposited in our wake. We were off! 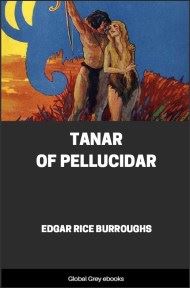 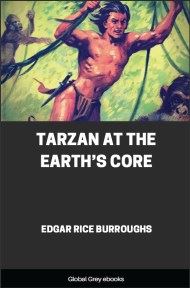 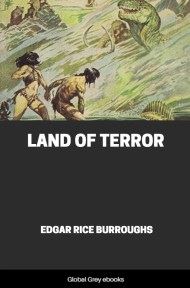 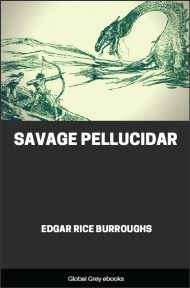