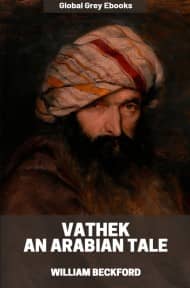 Vathek; An Arabian Tale is a Gothic novel written by William Beckford, and first published in 1786. It tells the story of Caliph Vathek, the ninth caliph of the Abassides, who buys some glowing swords from a travelling merchant. Wanting to decipher the messages on them, he invites the merchant to dinner. However, he gets no answers and locks up the merchant, who somehow disappears in the night. Finally he finds a scholar who translates the lettering, but the next morning, the message on the swords changes. Led by an insatiable thirst, Vathek goes to a fountain to drink and comes across the merchant again, who goes back to the Court with him. Afer this, things get weirder, with the merchant being transformed into a ball and being kicked by all the townspeople, child sacrifices, and Islamic dwarfs - all in the name of Vathek trying to gain supernatural powers.

Production notes: This ebook of Vathek; An Arabian Tale was published by Global Grey ebooks on 20th January 2021. The artwork used for the cover is 'Orientalec' by Ivana Kobilca.