The River of Life, and Other Stories

The River of Life, and Other Stories is a short collection of stories by Russian author Aleksandr Kuprin. Includes: The River of Life; Captain Ribnikov; The Outrage; and, The Witch.

This book has 100 pages in the PDF version. This translation by John Middleton Murry was originally published in 1916.

Excerpt from The River of Life, and Other Stories

The landlady’s room in the ‘Serbia.’ Yellow wallpaper; two windows with dirty muslin curtains; between them an oval squinting mirror, stuck at an angle of forty-five degrees, reflects a painted floor and chair legs; on the window-sills dusty, pimply cactuses; a cage with a canary hangs from the ceiling. The room is partitioned off by red screens of printed calico: the smaller part on the left is the bedroom of the landlady and her children; that on the right is blocked up with varied odds and ends of furniture—bedridden, rickety, and lame. In the corners all kinds of rubbish are in chaotic cobwebbed heaps: a sextant in a ginger leather case, and with it a tripod and a chain, some old trunks and boxes, a guitar without strings, hunting boots, a sewing machine, a ‘Monopan’ musical box, a camera, about five lamps, piles of books, dresses, bundles of linen, and a great many things besides. All these things had been detained at various times by the landlady for rent unpaid, or left behind by runaway lodgers. You cannot move in the room because of them.

The ‘Serbia’ is a third-rate hotel. Permanent lodgers are a rarity, and those are prostitutes. Mostly they are casual passengers who float up to town on the Dnieper: small farmers, Jewish commission agents, distant provincials, pilgrims, and village priests who come to town to inform, or are returning home when the information has been lodged. Rooms in the ‘Serbia’ are also occupied by couples from the town for the night or a few days.

Spring. About three in the afternoon. The curtains of the open windows stir gently, and the room smells of kerosene and baked cabbage. It is the landlady warming up on her stove a bigoss à la Polonaise of cabbage, pork fat, and sausage, with a great deal of pepper and bay leaves. She is a widow between thirty-six and forty, a strong, quick, good-looking woman. The hair that she wears in curls over her forehead has a strong tinge of grey; but her face is fresh, her big sensual mouth red, and her young dark eyes moist and playfully sly. Her name is Anna Friedrichovna. She is half German, half Pole, and comes from the Baltic Provinces; but her close friends call her Friedrich simply, which suits her determined character better. She is quick-tempered, scolds and talks bawdy. Sometimes she fights with her porters and the lodgers who have been on the spree; she drinks as well as any man, and has a mad passion for dancing. She changes from abuse to laughing in a second. She has but small respect for the law, receives lodgers without passports, and with her own hands, as she says, ‘chucks into the street’ those who don’t pay up—that is, she unlocks his door while he is out, and puts all his things in the passage or on the stairs, and sometimes in her own room. The police are friendly with her for her hospitality, her cheerful character, and particularly for the gay, easy, unceremonious, disinterested complaisance with which she responds to man’s passing emotions.

She has four children. The two eldest, Romka and Alychka, have not yet come back from school, and the younger, Adka, seven, and Edka, five, strong brats with cheeks mottled with mud, blotches, tear-stains, and the sunburn of early spring, are always to be found near their mother. Both of them hold on to the table leg and beg. They are perpetually hungry, because their mother does not pay much attention to food; they eat anyhow, at different times, sending into a little general shop for anything they want. Sticking out his lips in a circle, frowning, and looking out under his forehead, Adka roars in a loud bass: ‘That’s what you’re like. You won’t give me a taste.’ ‘Let me try,’ Edka speaks through his nose, scratching his calf with his bare foot.

At the table by the window sits Lieutenant Valerian Ivanovich Tchijhevich of the Army Reserve. Before him is the register, in which he enters the lodgers’ passports. But after yesterday’s affair the work goes badly; the letters wave about and crawl away. His trembling fingers quarrel with the pen. There is a roaring in his ears like the telegraph poles in autumn. At times it seems to him that his head is beginning to swell, to swell ... and the table, the book, the inkstand, and the lieutenant’s hand go terribly far away and become quite tiny. Then again the book comes up to his very eyes, the inkstand grows and repeats itself, and his head grows small, turns to queer strange sizes.

Lieutenant Tchijhevich’s appearance speaks of former beauty and lost position; his black hair bristles, and a bald patch shows on the nape of his neck. His beard is fashionably trimmed to a sharp point. His face is lean, dirty, pale, dissipated. On it is, as it were written, the full history of the lieutenant’s obvious weaknesses and secret diseases.

His situation in the ‘Serbia’ is complicated. He goes to the magistrates on Anna Friedrichovna’s behalf. He hears the children’s lessons and teaches them deportment, keeps the house register, makes out the lodgers’ accounts, reads the newspaper aloud in the morning and talks of politics. He usually sleeps in one of the vacant rooms and, in case of an influx of guests, in the passage on an ancient sofa, whose springs and stuffing stick out together. When this happens the lieutenant carefully hangs all his property on nails above the sofa: his overcoat, cap, his morning coat, shiny with age and white in the seams but tolerably clean, a ‘Monopole’ paper collar, an officer’s cap with a blue band; but he puts his notebook and his handkerchief with some one else’s initials under his pillow.

The widow keeps her lieutenant under her thumb. ‘Marry me and I’ll do anything for you,’ she promises. ‘Full equipment, all the linen you want, a fine pair of boots and goloshes as well. You’ll have everything, and on holidays I’ll let you wear my late husband’s watch with the chain.’ But the lieutenant is still thinking about it. He values his freedom, and sets high store by his former dignity as an officer. However, he is wearing out some of the older portions of the deceased’s linen. 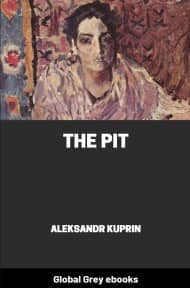 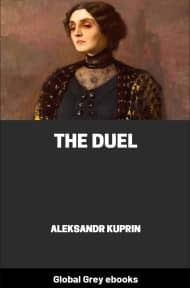 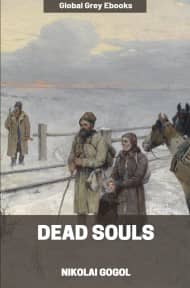