Oroonoko: or, the Royal Slave 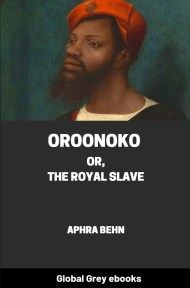 Oroonoko: or, the Royal Slave is a short work of prose fiction by Aphra Behn, published in 1688. The narrator opens with an account of the colony of Surinam and its native people. Within this is a historical tale concerning the grandson of an African king, Prince Oroonoko. The story follows him as he falls in love, is sold into slavery, is betrayed by his grandfather, becomes reunited with the woman he loves, and leads a slaves revolt which ends in tragedy. Not immediately successful in her own lifetime, Oroonoko is now the most studied of Aphra Behn's novels. Researchers today cannot say whether or not the narrator of Oroonoko represents Aphra Behn and, if so, tells the truth. Scholars have argued for over a century about whether or not Behn even visited Surinam.

This book has 74 pages in the PDF version, and was originally published in 1688.

Production notes: This ebook of Oroonoko: or, the Royal Slave was published by Global Grey in 2020.