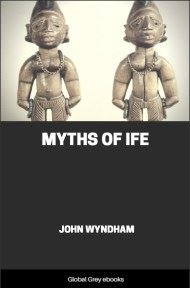 Myths of Ife is a book by John Wyndham, first published in 1910. A translation of some of the myths of the Yoruba people of Nigeria, the book contains a history of the creation of the world, the gods, and humanity, and the early days of the sacred city of Ífè - the traditional center of Yoruba culture. The text was recited to the author/translator by the high priests of Ífè, and the book is still cited in some books on traditional Yoruba religion and thought today. Chapters include: The Beginning; The Descent; The War Of The Gods; The Sacrifice Of Mórimi; The Úbo Wars; and, The Passing Of Ógun.

This book has 51 pages in the PDF version, and was originally published in 1910.

Production notes: This ebook of Myths of Ife was published by Global Grey on the 5th September 2018.