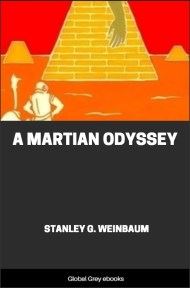 A Martian Odyssey is a science fiction short story by Stanley G. Weinbaum originally published in the July 1934 issue of Wonder Stories. A four-man crew crash lands on Mars, and Dick Jarvis, who sets out on his own, meets Tweel, a sympathetic creature who shows him the ways of the planet.

This book has 29 pages in the PDF version, and was originally published in 1934.

Production notes: This ebook of A Martian Odyssey was published by Global Grey in 2018.