In the Days of the Comet is a 1906 science fiction book written by H. G. Wells, about the effects of a comet entering the earth's atmosphere. This event brings about a great change in humanity, and one for the good, as people see the beauty of the world and in turn become more loving and generous to their fellow humans. In the background of this, is the story of Willie Leadford; an initially angry young man with plans of destruction after his lover rejects him in favour of someone richer. The book ends with an endorsement of polyamourous relationships; a fact that didn't go down too well with Wells' peers.

This book has 226 pages in the PDF version, and was originally published in 1906.

Excerpt from 'In the Days of the Comet'

I HAVE set myself to write the story of the Great Change, so far as it has affected my own life and the lives of one or two people closely connected with me, primarily to please myself.

Long ago in my crude unhappy youth, I conceived the desire of writing a book. To scribble secretly and dream of authorship was one of my chief alleviations, and I read with a sympathetic envy every scrap I could get about the world of literature and the lives of literary people. It is something, even amidst this present happiness, to find leisure and opportunity to take up and partially realize these old and hopeless dreams. But that alone, in a world where so much of vivid and increasing interest presents itself to be done, even by an old man, would not, I think, suffice to set me at this desk. I find some such recapitulation of my past as this will involve, is becoming necessary to my own secure mental continuity. The passage of years brings a man at last to retrospection; at seventy-two one’s youth is far more important than it was at forty. And I am out of touch with my youth. The old life seems so cut off from the new, so alien and so unreasonable, that at times I find it bordering upon the incredible. The data have gone, the buildings and places. I stopped dead the other afternoon in my walk across the moor, where once the dismal outskirts of Swathinglea straggled toward Leet, and asked, “Was it here indeed that I crouched among the weeds and refuse and broken crockery and loaded my revolver ready for murder? Did ever such a thing happen in my life? Was such a mood and thought and intention ever possible to me? Rather, has not some queer nightmare spirit out of dreamland slipped a pseudo-memory into the records of my vanished life?” There must be many alive still who have the same perplexities. And I think too that those who are now growing up to take our places in the great enterprise of mankind, will need many such narratives as mine for even the most partial conception of the old world of shadows that came before our day. It chances too that my case is fairly typical of the Change; I was caught midway in a gust of passion; and a curious accident put me for a time in the very nucleus of the new order.

My memory takes me back across the interval of fifty years to a little ill-lit room with a sash window open to a starry sky, and instantly there returns to me the characteristic smell of that room, the penetrating odor of an ill-trimmed lamp, burning cheap paraffin. Lighting by electricity had then been perfected for fifteen years, but still the larger portion of the world used these lamps. All this first scene will go, in my mind at least, to that olfactory accompaniment. That was the evening smell of the room. By day it had a more subtle aroma, a closeness, a peculiar sort of faint pungency that I associate — I know not why — with dust.

Let me describe this room to you in detail. It was perhaps eight feet by seven in area and rather higher than either of these dimensions; the ceiling was of plaster, cracked and bulging in places, gray with the soot of the lamp, and in one place discolored by a system of yellow and olive-green stains caused by the percolation of damp from above. The walls were covered with dun-colored paper, upon which had been printed in oblique reiteration a crimson shape, something of the nature of a curly ostrich feather, or an acanthus flower, that had in its less faded moments a sort of dingy gaiety. There were several big plaster-rimmed wounds in this, caused by Parload’s ineffectual attempts to get nails into the wall, whereby there might hang pictures. One nail had hit between two bricks and got home, and from this depended, sustained a little insecurely by frayed and knotted blind-cord, Parload’s hanging bookshelves, planks painted over with a treacly blue enamel and further decorated by a fringe of pinked American cloth insecurely fixed by tacks. Below this was a little table that behaved with a mulish vindictiveness to any knee that was thrust beneath it suddenly; it was covered with a cloth whose pattern of red and black had been rendered less monotonous by the accidents of Parload’s versatile ink bottle, and on it, leit motif of the whole, stood and stank the lamp. This lamp, you must understand, was of some whitish translucent substance that was neither china nor glass, it had a shade of the same substance, a shade that did not protect the eyes of a reader in any measure, and it seemed admirably adapted to bring into pitiless prominence the fact that, after the lamp’s trimming, dust and paraffin had been smeared over its exterior with a reckless generosity.

The uneven floor boards of this apartment were covered with scratched enamel of chocolate hue, on which a small island of frayed carpet dimly blossomed in the dust and shadows.

There was a very small grate, made of cast-iron in one piece and painted buff, and a still smaller misfit of a cast-iron fender that confessed the gray stone of the hearth. No fire was laid, only a few scraps of torn paper and the bowl of a broken corn-cob pipe were visible behind the bars, and in the corner and rather thrust away was an angular japanned coal-box with a damaged hinge. It was the custom in those days to warm every room separately from a separate fireplace, more prolific of dirt than heat, and the rickety sash window, the small chimney, and the loose-fitting door were expected to organize the ventilation of the room among themselves without any further direction.

Parload’s truckle bed hid its gray sheets beneath an old patchwork counterpane on one side of the room, and veiled his boxes and suchlike oddments, and invading the two corners of the window were an old whatnot and the wash hand stand, on which were distributed the simple appliances of his toilet. 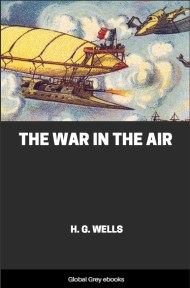 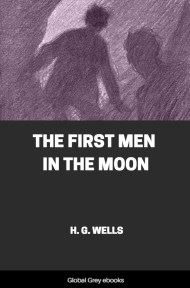 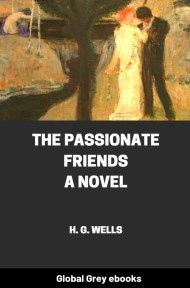