The Story Of The Tuatha De Danaan And Of The Fianna Of Ireland, this is Lady Gregory's retelling of the first and third cycles of the mythic history of Ireland: the Mythological and the Fenian. William Butler Yeats wrote that 'I think this book is the best that has come out of Ireland in my time.'

This book has 440 pages in the PDF version, and was originally published in 1904.

Excerpt from 'Gods and Fighting Men'

IT was in a mist the Tuatha de Danaan, the people of the gods of Dana, or as some called them, the Men of Dea, came through the air and the high air to Ireland.

It was from the north they came; and in the place they came from they had four cities, where they fought their battle for learning: great Falias, and shining Gorias, and Finias, and rich Murias that lay to the south. And in those cities they had four wise men to teach their young men skill and knowledge and perfect wisdom: Senias in Murias; and Arias, the fair-haired poet, in Finias; and Urias of the noble nature in Gorias; and Morias in Falias itself. And they brought from those four cities their four treasures: a Stone of Virtue from Falias, that was called the Lia Fail, the Stone of Destiny; and from Gorias they brought a Sword; and from Finias a Spear of Victory; and from Murias the fourth treasure, the Cauldron that no company ever went away from unsatisfied.

It was Nuada was king of the Tuatha de Danaan at that time, but Manannan, son of Lir, was greater again. And of the others that were chief among them were Ogma, brother to the king, that taught them writing, and Diancecht, that understood healing, and Neit, a god of battle, and Credenus the Craftsman, and Goibniu the Smith. And the greatest among their women were Badb, a battle goddess; and Macha, whose mast-feeding was the heads of men killed in battle; and the Morrigu, the Crow of Battle; and Eire and Podia and Banba, daughters of the Dagda, that all three gave their names to Ireland afterwards; and Eadon, the nurse of poets; and Brigit, that was a woman of poetry, and poets worshipped her, for her sway was very great and very noble. And she was a woman of healing along with that, and a woman of smith's work, and it was she first made the whistle for calling one to another through the night. And' the one side of her face was ugly, but the other side was very comely. And the meaning of her name was Breo-saighit, a fiery arrow. And among the other women there were many shadow-forms and great queens; but Dana, that was called the Mother of the Gods, was beyond them all.

And the three things they put above all others were the plough and the sun and the hazel-tree, so that it was said in the time to come that Ireland was divided between those three, Coil the hazel, and Cecht the plough, and Grian the sun.

And they had a well below the sea where the nine hazels of wisdom were growing; that is, the hazels of inspiration and of the knowledge of poetry. And their leaves and their blossoms would break out in the same hour, and would fall on the well in a shower that raised a purple wave. And then the five salmon that were waiting there would eat the nuts, and their colour would come out in the red spots of their skin, and any person that would eat one of those salmon would know all wisdom and all poetry. And there were seven streams of wisdom that sprang from that well and turned back to it again; and the people of many arts have all drank from that well.

It was on the first day of Beltaine, that is called now May Day, the Tuatha de Danaan came, and it was to the north-west of Connacht they landed. But the Firbolgs, the Men of the Bag, that were in Ireland before them, and that had come from the South, saw nothing but a mist, and it lying on the hills.

Eochaid, son of Erc, was king of the Firbolgs at that time, and messengers came to him at Teamhair, and told him there was a new race of people come into Ireland, but whether from the earth or the skies or on the wind was not known, and that they had settled themselves at Magh Rein.

They thought there would be wonder on Eochaid when he heard that news; but there was no wonder on him, for a dream had come to him in the night, and when he asked his Druids the meaning of the dream, it is what they said, that it would not be long till there would be a strong enemy coming against him.

Then King Eochaid took counsel with his chief advisers, and it is what they agreed, to send a good champion of their own to see the strangers and to speak with them. So they chose out Sreng, that was a great fighting man, and he rose up and took his strong red-brown shield, and his two thick-handled spears, and his sword, and he set out from Teamhair, and went on towards the place the. strangers were, at Magh Rein.

But before he reached it, the watchers of the Tuatha de Danaan got sight of him, and they sent out one of their own champions, Bres, with his shield and his sword and his two spears, to meet him and to talk with him.

So the two champions went one towards the other slowly, and keeping a good watch on one another, and wondering at one another's arms, till they came near enough for talking; and then they stopped, and each put his shield before his body and struck it hard into the ground, and they looked at one another over the rim. Bres was the first to speak, and when Sreng heard it was Irish he was talking, his own tongue, he was less uneasy, and they drew nearer, and asked questions as to one another's family and race.

And after a while they put their shields away, and it was what Sreng said, that he had raised his in dread of the thin, sharp spears Bres had in his hand. And Bres said he himself was in dread of the thick-handled spears he saw with Sreng, and he asked were all the aims of the Firbolgs of the same sort. And Sreng took off the tyings of his spears to show them better, and Bres wondered at them, being so strong and so heavy, and so sharp at the sides though they had no points. And Sreng told him the name of those spears was Craisech, and that they would break through shields and crush flesh and bones, so that their thrust was death or wounds that never healed. And then he looked at the sharp, thin, hard-pointed spears that were with Bres. And in the end they made an exchange of spears, the way the fighters on each side would see the weapons the others were used to. And it is the message Bres sent to the Firbolgs, that if they would give up one half of Ireland, his people would be content to take it in peace; but if they would not give up that much, there should be a battle. And he and Sreng said to one another that whatever might happen in the future, they themselves would be friends. 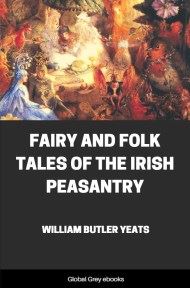 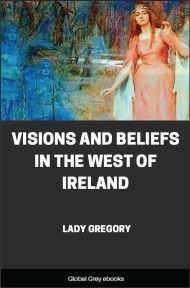 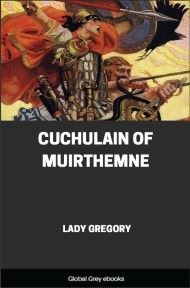 The Destruction of Da Derga’s Hostel