Includes: The Historical Jesus and Mythical Christ; Paul the Gnostic Opponent of Peter; The 'Logia of the Lord'; Gnostic and Historic Christianity; The Hebrew and Other Creations; In Reply to Professor A. H. Sayce; The Devil of Darkness in the Light of Evolution; Luniolatry, Ancient and Modern; Greek Mythology and the God Apollo; Man in Search of His Soul; The Seven Souls of Man; A Retort; and, The Coming Religion.

This book has 373 pages in the PDF version.

In presenting my readers with some of the data which show that much of the Christian History was pre-extant as Egyptian Mythology. I have to ask you to bear in mind that the facts, like other foundations, have been buried out of sight for thousands of years in a hieroglyphical language, that was never really read by Greek or Roman, and could not be read until the lost clue was discovered by Champollion, almost the other day! In this way the original sources of our Mytholatry and Christology remained as hidden as those of the Nile, until the century in which we live. The mystical matter enshrouded in this language was sacredly entrusted to the keeping of the buried dead, who have faithfully preserved it as their Book of Life, which was placed beneath their pillows, or clasped to their bosoms, in their coffins and their tombs.

Secondly, although I am able to read the hieroglyphics, nothing offered to you is based on my translation. I work too warily for that! The transcription and literal rendering of the hieroglyphic texts herein employed are by scholars of indisputable authority. There is no loophole of escape that way. I lectured upon the subject of Jesus many years ago. At that time I did not know how we had been misled, or that the "Christian scheme" (as it is aptly called) in the New Testament is a fraud, founded on a fable in the Old!

I then accepted the Canonical Gospels as containing a veritable human history, and assumed, as others do, that the history proved itself. Finding that Jesus, or Jehoshua Ben-Pandira, was an historical character, known to the Talmud, I made the common mistake of supposing that this proved the personal existence of the Jesus found portrayed in the Canonical Gospels. But after you have heard my story, and weighed the evidence now for the first time collected and presented to the public, you will not wonder that I should have changed my views, or that I should be impelled to tell the truth to others, as it now appears to myself; although I am only able to summarize here, in the briefest manner possible, a few of the facts that I have dealt with exhaustively elsewhere.

The personal existence of Jesus as Jehoshua Ben-Pandira can be established beyond a doubt. One account affirms that, according to a genuine Jewish tradition "that man (who is not to be named) was a disciple of Jehoshua Ben-Perachia." It also says, "He was born in the fourth year of the reign of the Jewish King Alexander Jannaeus, notwithstanding the assertions of his followers that he was born in the reign of Herod." That would be more than a century earlier than the date of birth assigned to the Jesus of the Gospels! But it can be further shown that Jehoshua Ben-Pandira may have been born considerably earlier even than the year 102 B.C., although the point is not of much consequence here. Jehoshua, son of Perachia, was a president of the Sanhedrin--the fifth, reckoning from Ezra as the first: one of those who in the line of descent received and transmitted the oral law, as it was said, direct from Sinai. There could not be two of that name. This Ben-Perachia had begun to teach as a Rabbi in the year 154 B.C. We may therefore reckon that he was not born later than 180-170 B.C., and that it could hardly be later than 100 B.C. when he went down into Egypt with his pupil. For it is related that he fled there in consequence of a persecution of the Rabbis, feasibly conjectured to refer to the civil war in which the Pharisees revolted against King Alexander Jannaeus, and consequently about 105 B.C. If we put the age of his pupil, Jehoshua Ben-Pandira, at fifteen years, that will give us an approximate date, extracted without pressure, which shows that Jehoshua Ben-Pandira may have been born about the year 120 B.C. But twenty years are a matter of little moment here.

According to the Babylonian Gemara to the Mishna of Tract "Shabbath," this Jehoshua, the son of Pandira and Stada, was stoned to death as a wizard, in the city of Lud, or Lydda, and afterwards crucified by being hanged on a tree, on the eve of the Passover. This is the manner of death assigned to Jesus in the Book of Acts. The Gemara says there exists a tradition that on the rest-day before the Sabbath they crucified Jehoshua, on the rest-day of the Passah (the day before the Passover). The year of his death, however, is not given in that account; but there are reasons for thinking it could not have been much earlier nor later than B.C. 70, because this Jewish King Jannaeus reigned from the year 106 to 79 B.C. He was succeeded in the government by his widow Salome, whom the Greeks called Alexandra, and who reigned for some nine years. Now the traditions, especially of the first "Toledoth Jehoshua," relate that the Queen of Jannaeus, and the mother of Hyrcanus, who must therefore be Salome, in spite of her being called by another name, showed favour to Jehoshua and his teaching; that she was a witness of his wonderful works and powers of healing, and tried to save him from the hands of his sacerdotal enemies, because he was related to her; but that during her reign, which ended in the year 71 B.C., he was put to death. The Jewish writers and Rabbis with whom I have talked always deny the identity of the Talmudic Jehoshua and the Jesus of the Gospels. "This," observes Rabbi Jechiels, "which has been related to Jehoshua Ben-Perachia and his pupil, contains no reference whatever to him whom the Christians honour as God!" Another Rabbi, Salman Zevi, produced ten reasons for concluding that the Jehoshua of the Talmud was not he who was afterwards called Jesus of Nazareth. Jesus of Nazareth (and of the Canonical Gospels) was unknown to Justus, to the Jew of Celsus, and to Josephus, the supposed reference to him by the latter being an undoubted forgery.

The "blasphemous writings of the Jews about Jesus," as Justin Martyr calls them, always refer to Jehoshua Ben-Pandira, and not to the Jesus of the Gospels. It is Ben-Pandira they mean when they say they have another and a truer account of the birth and life, the wonder-working and death of Jehoshua or Jesus. This repudiation is perfectly honest and soundly based. The only Jesus known to the Jews was Jehoshua Ben-Pandira, who had learnt the arts of magic in Egypt, and who was put to death by them as a sorcerer. This was likewise the only Jesus known to Celsus, the writer of the "True Logos," a work which the Christians managed to get rid of bodily, with so many other of the anti-Christian evidences. 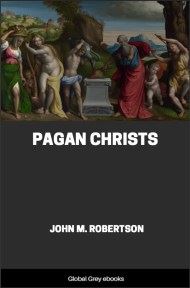 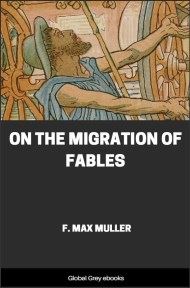 On the Migration of Fables 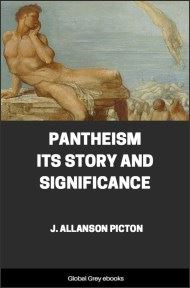 Pantheism Its Story and Significance