The Folk-Lore of the North-East of Scotland 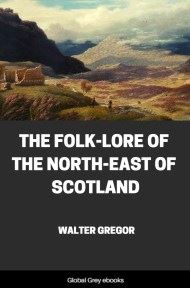 This is an ethnographic study of the inhabitants of the North-Eastern area of Scotland in the mid-19th century, at a time when an agrarian, barter economy still prevailed. Life was hard among these remote coastal communities, and they lived in fear of maleficent witches and the 'Evil Eye'. Many of the rituals, taboos and folkways in this book are to ward off witchcraft directed against economic mainstays such as livestock and fishing. Chapters include; Birth; The Child; Baptism; The Nursery; Boy Code Of Honour; About The Human Body; Dreams, Divination; Leechcraft; Evenings At The Fireside; Fairies; Waterkelpie; Ghosts; Witches, and more. Also includes a Glossary.

This book has 254 pages in the PDF version, and was originally published in 1881.

Production notes: This ebook of The Folk-Lore of the North-East of Scotland was published by Global Grey in 2019.