The Swedish Twins Who Ran into Traffic

The very strange story of Ursula and Sabina Eriksson

In May 2008, something happened on the M6 motorway in England. The event was captured on camera due to the fact that at that time, a tv crew were filming for a show called Traffic Cops. Although it's now over a decade since the Eriksson twins occurrence, it's a story that still gets brought up in this household every so often. It's a bizarre rollercoaster of a story that involved the twins running into traffic, exhibiting paranoia, stabbing someone, and jumping off a bridge. If you've never heard of Sabina and Ursula Eriksson, prepare for a wild ride.

The video of all this is at the end of this article.

Sabina and Ursula Eriksson were born in Sweden in 1967. In their youth, there was no history of mental health issues and no criminal convictions.

Fast forward to 2000 - Ursula was living in the United States, while Sabina had relocated to Ireland where she lived with her husband and two children.

On Friday 16th May, Ursula travelled from the United States to visit her sister's home in Mallow, County Cork, Ireland. For reasons that are still unclear, the two sisters secretly left Sabina's home (meaning Sabina left her children and husband as well) and caught the ferry to Liverpool. They arrived at Liverpool at 8.30am on Saturday 17th May.

Once in Liverpool, the pair went to St Anne Street Police Station and reported that they had concerns over the safety of Sabina's children. Liverpool Police contacted the Dublin Police and learned that Sabina had had an argument with her husband the previous evening.

At about 11.30 that same morning, the twins boarded a National Express coach that was heading to London. Whilst the bus was not scheduled for such a stop, it did so anyway at Keele service station at about 1pm. There are two stories as to why this happened. The police report states that it was because the twins were not feeling well. However, the coach driver claimed that he made the stop because the twins were behaving oddly and erratically. He was concerned also that they were clinging tightly to their bags, and refused to allow him to search their luggage, and so he would not allow them to reboard the coach. The manager of the service station was also suspicious about the twin's behaviour, and she called the police. The police came, talked to the twins, and left feeling that the women were harmless.

The twins were then seen on CCTV cameras leaving the service station and were caught on the cameras walking down the central reservation of the M6. Their brother, Björn, would later claim that they were fleeing from 'maniacs', although none of this was caught on film. Sabina and Ursula then tried to cross the motorway, causing traffic chaos, and leading to Sabina being struck by a SEAT León sedan. Highways Agency officers, as well as police from the Central Motorway Police Group were called over to assist. The police were accompanied by the tv crew that were filming for the show Traffic Cops. The police stopped the sisters and on the film, you can see at this point, it all appeared calm. The twins stood smoking, and chatting with the police, as the police chief brought his officer up to speed on what had happened.

Shortly after the police chief told his officer that Sabina 'seemed alright', Ursula suddenly ran into the road. A police officer who was stood next to her, tried to stop her by pulling her coat, but she broke free of it, and ran into the side of an oncoming Mercedes-Benz articulated lorry that was travelling at around 56 mph. In the film, you can see her shoes strewn across the road.

Almost immediately after, Sabina also runs into the road and is struck head-on by a Volkswagen Polo which was travelling at a high speed.

Both twins survived - Ursula's legs had been crushed and she was immobilised by paramedics. Sabina was unconscious for fifteen minutes.

Whilst being given medical help, Ursula (who, may I remind you, has just been hit by a truck), started resisting help, spitting, scratching, and screaming at the police - "I recognise you – I know you're not real." Sabina, having regained consciousness (and again, remember, she has just been hit by a high speed car), also started screaming that, "They're going to steal your organs."

Incredibly at this point, Sabina got to her feet (despite attempts to get her to stay on the ground), and began screaming for help and calling for police, even though they were already present. She then proceeded to punch an officer in the face before running into traffic on the other side of the motorway. Emergency workers, police, as well as several members of the public managed to restrain her at which point she was handcuffed and sedated.

Ursula, her legs fractured, was taken to hospital via air ambulance. Sabina was taken to hospital and released about five hours later into police custody. Whilst there, she didn't seem to show any concern over her sister's injuries, but was a lot calmer and more in control, commenting to a police officer, "We say in Sweden that an accident rarely comes alone. Usually at least one more follows – maybe two." 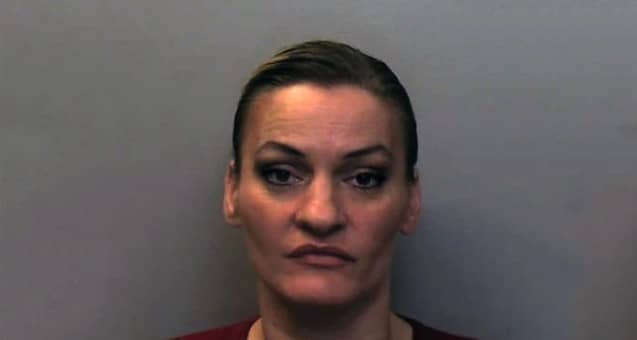 The following day, Sabina was released from police custody, having pled guilty to punching a police officer and trespassing on the highway. Incredibly, no psychiatric evaluation had taken place.

After leaving court, Sabina began wandering the streets of Stoke-on-Trent, trying to locate her sister in hospital. She was wearing her sister's green top and carrying her possessions (including a laptop and about £1,000 in cash) in a clear plastic bag given to her by the police. At around 7pm, two local men, Peter Molloy and his friend Glenn Hollinshead, a 54 year-old former RAF airman spotted Sabina and struck up a conversation. Sabina stroked Glenn's dog, and appeared friendly if also a little nervous. She asked if there were any Bed and Breakfast's, or hotels in the area, and Glenn suggested that she come back to his place instead. She accepted and seemed to relax on the way there, telling the men how she was trying to find her sister. At the house, however, she got jumpy again, constantly peering out of the window, and offering the men cigarettes, only to snatch them out of their mouths, claiming that they might be poisoned. Shortly before midnight, Molloy left. Sabina stayed the night.

The next evening, Glenn made some food and then went outside to ask his neighbour, Frank Booth, if he could borrow some teabags. About one minute after going back into his house, he staggered back outside bleeding, telling Frank, "She stabbed me." He collapsed on the ground, told his friend "Look after my dog for me", and died from his injuries.

As Frank called the police, Sabina ran away and was caught on a nearby CCTV camera with a hammer, periodically hitting herself over the head with it. She was spotted by a passing motorist named Joshua Grattage, who tried to stop her and take the hammer. Sabina screamed and took a roof tile from her pocket and hit Joshua on the back of the head with it, stunning him temporarily. By this time, paramedics had found her and began chasing her. Eventually she made it to Heron Cross where she jumped from a 40 ft high bridge onto the A50 below, breaking both her ankles and fracturing her skull in the process.

Sabina was released from hospital on the 11th September 2008 at which point she was taken into custody and charged with murder. Ursula was also released from hospital in the same month, and relocated to Sweden and then on to America. Sabina's trial was due to start in February 2009, but because of problems obtaining her medical records from Sweden, the trial didn't begin until September.

Sabina pleaded guilty to manslaughter with diminished responsibility on 2 September 2009. She never explained her actions, only ever saying 'no comment' whenever questioned. The video from the M6 motorway incident was never shown in court. Both the prosecution and the defence claimed that she had been insane at the time of the crime, and had become sane again at the time of the trial. The defence further claimed that she was a secondary sufferer of folie à deux (a madness of two), and was influenced by her twin sister.

Her plea was accepted, with the Judge stating that she had a 'low' level of culpability for her criminal actions. Sabina Eriksson was sentenced to just 5 years in prison, and having spent 439 days in custody, was released in 2011.

There were some calls for an investigation into the way the criminal justice system handled the Eriksson case, but ultimately Sabina served less than 3 years in prison, and since her release, has disappeared. Her whereabouts today are unknown.

Furthermore, in the documentary that the BBC made about the case, called Madness in the Fast Lane, there is a clip missing. Uploaded anonymously to the internet, the clip from the original Traffic Cops film, shows two police officers standing on the shoulder of the M6 after the incident, agreeing that the sisters should be given a "136" — which is a clause within the Mental Health Act that means the police can "hold" a person on account of their mental health, as well as having to give the detainee a mental health assessment. Of course, this never happened, and there are no explanations as to why this clip was edited out of the final film. If it had happened, Sabina would never have been released so early, which means of course, that she would never have met Glenn Hollinshead, and he would not have died.

When people see the film, and see the strength and resilience that the twins exhibited, they usually come to the conclusion that drugs were involved. There is no evidence that the Eriksson twins were on drugs of any kind, and no article written about them, mentions drugs.

Questions remain unanswered - for a start, why did Ursula leave the United States to visit her sister? Why did Sabina leave her house (and her children) so suddenly for a sister who she had not seen in several years? Why did their brother claim they were running from 'maniacs' when no evidence exists for it at all? What was the argument about, that Sabina and her husband had, and why did she claim to police that her children were unsafe? And if her children were unsafe, why did she leave them there?

How were the women so calm at the beginning of the footage, only to run into traffic minutes later, and start shouting about organs being taken?

Was this really a case of folie à deux? Cases such as this are very rare. Wikipedia only lists five notable cases, including the Eriksson twins, and one of these, the case of the Burari deaths in India was definitely more a murder-suicide than shared delusion.

Ultimately, only the Eriksson twins themselves know what happened that day, and why. But despite it being over a decade ago, it's an enduring mystery, and a fascinating case of apparent 'madness of two'.

And the edited out clip:

My Own Experiences with the Paranormal

Free Courses You Can Take Online