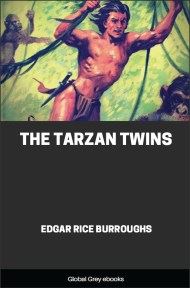 Part of a two novella collection; the other book being Tarzan and the Tarzan Twins, with Jad-bal-ja, the Golden Lion. Although these novellas come eleventh in the chronology of the Tarzan series, they aren't usually counted as part of the main series because they are children's book. But chronologically, they fall between Tarzan and the Ant Men, and Tarzan, Lord of the Jungle. Two schoolboys, Dick and Doc, are cousins who resemble each other because their mothers are twins. As Dick is also related to Tarzan through his father, they become known as the Tarzan Twins. Invited to visit Tarzan's African estate, they become lost in the jungle and are imprisoned by cannibals, from whom they escape. They are then reunited with their host, who introduces them to his pet lion, Jad-bal-ja. Subsequently, they become involved in an adventure involving exiles from the lost city of Opar, who have kidnapped Gretchen von Harben, the daughter of a missionary.

This book has 60 pages in the PDF version, and was originally published in 1927.

Production notes: This ebook of The Tarzan Twins was published by Global Grey in 2018.