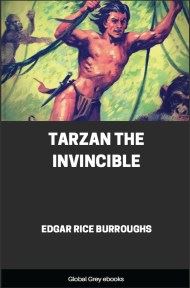 This is the fourteenth book in the Tarzan Series. Tarzan, his monkey friend Nkima, and Chief Muviro and his faithful Waziri warriors prevent Soviet communists from looting the lost city of Opar. The story also prominently features Tarzan's lion ally Jad-bal-ja. This book marks the last appearance of Opar and La in the Tarzan series, aside from the juvenile piece Tarzan and the Tarzan Twins with Jad-Bal-Ja the Golden Lion, which was published later but is chronologically earlier.

This book has 200 pages in the PDF version, and was originally published in 1931.

Production notes: This ebook of Tarzan the Invincible was published by Global Grey in 2018.