Tarzan and the Lost Empire 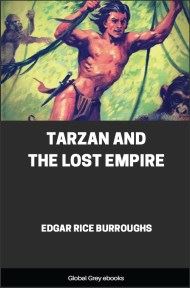 This is the twelfth book in the Tarzan Series. Tarzan and a young German find a lost remnant of the Roman Empire hidden in the mountains of Africa. This novel is notable for the introduction of Nkima, who serves as Tarzan’s monkey companion in it and a number of later Tarzan stories. It also reintroduces Muviro, first seen in Tarzan and the Golden Lion, as sub-chief of Tarzan’s Waziri warriors.

This book has 199 pages in the PDF version, and was originally published in 1929.

Production notes: This ebook of Tarzan and the Lost Empire was published by Global Grey in 2018.