The Symbolism Of The Tarot

P.D. Ouspensky was a leading and influential figure in occult and mystical thought and philosophy, most famous for his seminal work, Tertium Organum. Here he delves into the mystical symbolism of the Major Arcana of the tarot; this book reads more like poetry than a 'how to' book, and will illuminate your imagination with visions that will add depth and meaning to your readings and understanding of the mystery of tarot.

This book has 59 pages in the PDF version. This translation by A. L Pogossky was originally published in 1913.

Excerpt from 'The Symbolism Of The Tarot'

The triangle is God (the Trinity) or the world of ideas, or the noumenal world. The point is man's soul. The square is the visible, physical or phenomenal world. Potentially, the point is equal to the square, which means that all the visible world is contained in man's consciousness, is created in man's soul. And the soul itself is a point having no dimension in the world of the spirit, symbolized by the triangle. It is clear that such an idea could not have originated with ignorant people and clear also that the Tarot is something more than a pack of playing or fortune-telling cards.

H. P. Blavatsky mentions the Tarot in her works, and we have some reason for believing that she studied the Tarot. It is known that she loved to "play patience". We do not know what she read in the cards as she played this game, but the author was told that Madame Blavatsky searched persistently and for a long time for a MSS. on the Tarot.

In order to become acquainted with the Tarot, it is necessary to understand the basic ideas of the Kabala and of Alchemy. For it represents, as, indeed, many commentators of the Tarot think, a summary of the Hermetic Sciences--the Kabala, Alchemy, Astrology, Magic, with their different divisions. All these sciences, attributed to Hermes Trismegistus, really represent one system of a very broad and deep psychological investigation of the nature of man in his relation to the world of noumena (God, the world of Spirit) and to the world of phenomena (the visible, physical world). The letters of the Hebrew alphabet and the various allegories of the Kabala, the names of metals, acids and salts in alchemy; of planets and constellations in astrology; of good and evil spirits in magic--all these were only means to veil truth from the uninitiated.

But when the true alchemist spoke of seeking for gold, he spoke of gold in the soul of man. And he called gold that which in the New Testament is called the Kingdom of Heaven, and in Buddhism, Nirvana. And when the true astrologer spoke of constellations and planets he spoke of constellations and planets in the soul of man, i.e., of the qualities of the human soul and its relations to God and to the world. And when the true Kabalist spoke of the Name of God, he sought this Name in the soul of man and in Nature, not in dead books, nor in biblical texts, as did the Kabalist-Scholastics. The Kabala, Alchemy, Astrology, Magic are parallel symbolical systems of psychology and metaphysics. Any alchemical sentence may be read in a Kabalistic or astrological way, but the meaning will always be psychological and metaphysical.

We are surrounded by a wall built of our conceptions of the world, and are unable to look over this wall at the real world. The Kabala presents an effort to break this "enchanted circle". It investigates the world as it is, the world in itself.

The world in itself, as the Kabalists hold, consists of four elements, or the four principles forming One. These four principles are represented by the four letters of the name of Jehovah. The basic idea of the Kabala consists in the study of the Name of God in its manifestation. Jehovah in Hebrew is spelt by four letters, Yod, He, Vau and He--I. H. V. H. To these four letters is given the deepest symbolical meaning. The first letter expresses the active principle, the beginning or first cause, motion, energy, "I"; the second letter expresses the passive element, inertia, quietude, "not I;" the third, the balance of opposites, "form"; and the fourth, the result or latent energy.

The study of this Name (or the four-lettered word, tetragrammaton, in Greek) and the finding of it in everything constitutes the main problem of Kabalistic philosophy.

To state it in another way the Kabalists hold that these four principles penetrate and create everything. Therefore, when the man finds these four principles in things and phenomena of quite different categories (where before he had not seen similarity), he begins to see analogy between these phenomena. And, gradually, he becomes convinced that the whole world is built according to one and the same law, on one and the same plan. The richness and growth of his intellect consists in the widening of his faculty for finding analogies. Therefore the study of the law of the four letters, or the name of Jehovah presents a powerful means for widening consciousness.

There is a complete correspondence between the Kabala and Alchemy and Magic. In Alchemy the four elements which constitute the real world are called fire, water, air and earth; these fully correspond in significance with the four kabalistic letters. In Magic they are expressed as the four classes of spirits: elves (or salamanders), undines, sylphs and gnomes. 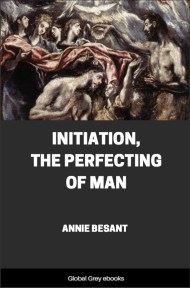 The Art of Distillation