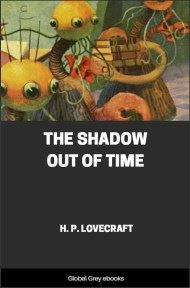 The Shadow Out of Time is a novella by American horror fiction writer H. P. Lovecraft. Written between November 1934 and February 1935, it was first published in the June 1936 issue of Astounding Stories. It tells of the Great Race of Yith, an extraterrestrial species with the ability to travel through space and time. The Yithians accomplish this by switching bodies with hosts from the intended spatial or temporal destination. The story implies that the effect when seen from the outside is similar to spiritual possession. The Yithians' original purpose was to study the history of various times and places, and they have amassed a library city that is filled with the past and future history of multiple races, including humans. Ultimately the Yithians use their ability to escape the destruction of their planet in another galaxy by switching bodies with a race of cone-shaped plant beings who lived 250 million years ago on Earth.

This book has 73 pages in the PDF version, and was originally published in 1936.

Production notes: This ebook of The Shadow Out of Time was published by Global Grey in 2018.