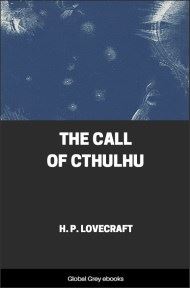 The Call of Cthulhu is a short story by American writer H. P. Lovecraft, first published in Weird Tales in 1928. It is the tale of a horrifying underwater monster coming to life and threatening mankind. The story is narrated by Francis Wayland Thurston who recounts to the reader his discovery of various notes that were left behind by his great uncle. The notes tell, among other things, of a strange cult who worship the Great Old Ones who lived long before there were any men and who were found chanting the phrase - 'In his house at R'lyeh, dead Cthulhu waits dreaming.'

Lovecraft didn't think much of the story, describing it as 'rather middling - not as bad as the worst', and it was initially rejected. However, the story became H.P. Lovecraft's most famous and most widely popular tale, spawning an entire mythology.

This book has 33 pages in the PDF version, and was originally published in 1928.

Production notes: This ebook of The Call of Cthulhu was published by Global Grey on the 12th August 2018.