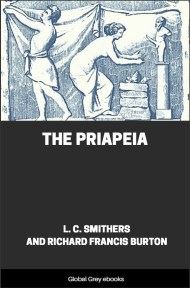 The Priapeia is a collection of ninety-five poems about the phallic god Priapus. It was compiled from literary works and inscriptions on images of the god by an unknown editor, who composed the introductory epigram. In the 19th century, the Priapeia were translated into English by Leonard Smithers and Richard Francis Burton, who provided numerous notes concerning the sexual practices that are referenced in the poems.

This book has 145 pages in the PDF version, and was originally published in 1890.

Production notes: This ebook of The Priapeia was published by Global Grey in 2018.