Politics is Aristotle's work of political philosophy; a thorough and carefully argued analysis that is based on a study of over 150 city constitutions. Covering a huge range of political issues in order to establish which types of constitution are best - both ideally and in particular circumstances - and how they may be maintained.

This book has 192 pages in the PDF version. This translation by Benjamin Jowett was originally published in 1885.

He who thus considers things in their first growth and origin, whether a state or anything else, will obtain the clearest view of them. In the first place there must be a union of those who cannot exist without each other; namely, of male and female, that the race may continue (and this is a union which is formed, not of deliberate purpose, but because, in common with other animals and with plants, mankind have a natural desire to leave behind them an image of themselves), and of natural ruler and subject, that both may be preserved. For that which can foresee by the exercise of mind is by nature intended to be lord and master, and that which can with its body give effect to such foresight is a subject, and by nature a slave; hence master and slave have the same interest. Now nature has distinguished between the female and the slave. For she is not niggardly, like the smith who fashions the Delphian knife for many uses; she makes each thing for a single use, and every instrument is best made when intended for one and not for many uses. But among barbarians no distinction is made between women and slaves, because there is no natural ruler among them: they are a community of slaves, male and female. Wherefore the poets say,

It is meet that Hellenes should rule over barbarians;
as if they thought that the barbarian and the slave were by nature one.

Out of these two relationships between man and woman, master and slave, the first thing to arise is the family, and Hesiod is right when he says,

First house and wife and an ox for the plough,

for the ox is the poor man's slave. The family is the association established by nature for the supply of men's everyday wants, and the members of it are called by Charondas 'companions of the cupboard,' and by Epimenides the Cretan, 'companions of the manger.' But when several families are united, and the association aims at something more than the supply of daily needs, the first society to be formed is the village. And the most natural form of the village appears to be that of a colony from the family, composed of the children and grandchildren, who are said to be suckled 'with the same milk.' And this is the reason why Hellenic states were originally governed by kings; because the Hellenes were under royal rule before they came together, as the barbarians still are. Every family is ruled by the eldest, and therefore in the colonies of the family the kingly form of government prevailed because they were of the same blood. As Homer says:

Each one gives law to his children and to his wives.

For they lived dispersedly, as was the manner in ancient times. Wherefore men say that the Gods have a king, because they themselves either are or were in ancient times under the rule of a king. For they imagine, not only the forms of the Gods, but their ways of life to be like their own.

When several villages are united in a single complete community, large enough to be nearly or quite self-sufficing, the state comes into existence, originating in the bare needs of life, and continuing in existence for the sake of a good life. And therefore, if the earlier forms of society are natural, so is the state, for it is the end of them, and the nature of a thing is its end. For what each thing is when fully developed, we call its nature, whether we are speaking of a man, a horse, or a family. Besides, the final cause and end of a thing is the best, and to be self-sufficing is the end and the best.

Hence it is evident that the state is a creation of nature, and that man is by nature a political animal. And he who by nature and not by mere accident is without a state, is either a bad man or above humanity; he is like the

whom Homer denounces -- the natural outcast is forthwith a lover of war; he may be compared to an isolated piece at draughts.

Now, that man is more of a political animal than bees or any other gregarious animals is evident. Nature, as we often say, makes nothing in vain, and man is the only animal whom she has endowed with the gift of speech. And whereas mere voice is but an indication of pleasure or pain, and is therefore found in other animals (for their nature attains to the perception of pleasure and pain and the intimation of them to one another, and no further), the power of speech is intended to set forth the expedient and inexpedient, and therefore likewise the just and the unjust. And it is a characteristic of man that he alone has any sense of good and evil, of just and unjust, and the like, and the association of living beings who have this sense makes a family and a state.

Further, the state is by nature clearly prior to the family and to the individual, since the whole is of necessity prior to the part; for example, if the whole body be destroyed, there will be no foot or hand, except in an equivocal sense, as we might speak of a stone hand; for when destroyed the hand will be no better than that. But things are defined by their working and power; and we ought not to say that they are the same when they no longer have their proper quality, but only that they have the same name. The proof that the state is a creation of nature and prior to the individual is that the individual, when isolated, is not self-sufficing; and therefore he is like a part in relation to the whole. But he who is unable to live in society, or who has no need because he is sufficient for himself, must be either a beast or a god: he is no part of a state. A social instinct is implanted in all men by nature, and yet he who first founded the state was the greatest of benefactors. For man, when perfected, is the best of animals, but, when separated from law and justice, he is the worst of all; since armed injustice is the more dangerous, and he is equipped at birth with arms, meant to be used by intelligence and virtue, which he may use for the worst ends. Wherefore, if he have not virtue, he is the most unholy and the most savage of animals, and the most full of lust and gluttony. But justice is the bond of men in states, for the administration of justice, which is the determination of what is just, is the principle of order in political society. 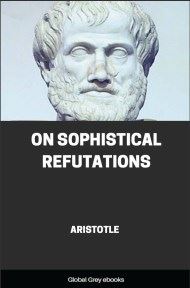 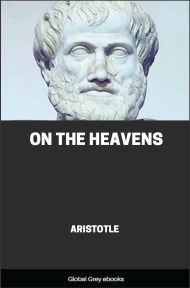 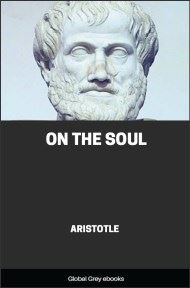