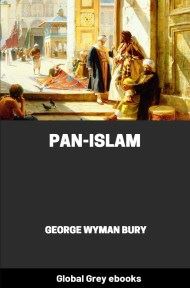 The author of this book was an explorer, an officer in the British Army, and an expert on the culture and language of the Arabs. Pan-Islam is presented as an 'elementary handbook' which discusses the political, social, and religious aspects of an international Islamic unity. Chapters include: It's Origins and Meaning; It's Bearing on War; It's Strengths and Weaknesses; Moslem and Missionary; and A Plea for Tolerance.

This book has 112 pages in the PDF version, and was originally published in 1919.

Production notes: This ebook of Pan-Islam was published by Global Grey in 2019.