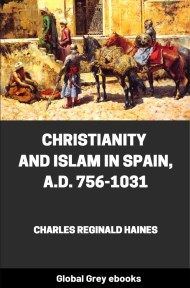 Christianity and Islam in Spain, A.D. 756-1031 is an 1889 book by Charles Reginald Haines. Chapter subjects include: Invasion of Spain by the barbarians; Period of Gothic rule; Landing of Abdurrahman; The Spanish confessors; Plan for procuring martyrdom; Revolt of Spaniards against Arabs; Khalifate saved by Abdurrahman III; Christians tolerated, even encouraged; Essential differences of Islam and Christianity; Moslem miracles; Jews persecuted by Goths; and more.

This book has 132 pages in the PDF version, and was originally published in 1889.