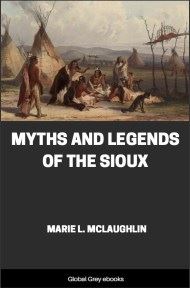 The timid rabbit who outwits the tyrannical bear, the wonderful turtle who marries the Indian chief's daughter, the pet crane who saves a family; these and many other legendary figures appear in Myths and Legends of the Sioux. Marie L. McLaughlin, born to a white father and a mixed-blood Sioux mother, heard these stories while growing up among the eastern Sioux of Minnesota. When she recorded them for posterity in 1916 she had long been the wife of James McLaughlin, whom she served as interpreter during the years he was head of the Devils Lake and Standing Rock agencies and an inspector for the Indian Bureau.

This book has 134 pages in the PDF version, and was originally published in 1916.

Production notes: This ebook of Myths and Legends of the Sioux was published by Global Grey in 2018.