The Magus, A Complete System of Occult Philosophy, Book 1

The Magus, or Celestial Intelligencer; being a Complete System of Occult Philosophy is a handbook of the occult and ceremonial magic. This is Book 1 of 2. Few people, even today, know that The Magus is a compilation, almost entirely consisting of selections from Cornelius Agrippa's Three Books of Occult Philosophy, the Fourth Book of Occult Philosophy attributed to Agrippa and the Robert Turner's 1655 translation of the Heptameron of Peter of Abano. Barrett made a few modifications and modernized the spelling and syntax of these selections. It deals with the natural magic of herbs and stones, magnetism, talismanic magic, alchemy, numerology, the elements, and biographies of famous adepts from history.

This book has 187 pages in the PDF version, and was originally published in 1801.

Excerpt from 'The Magus, A Complete System of Occult Philosophy, Book 1'

IN this Work, which we have written chiefly for the information of those who are curious and indefatigable in their enquiries into occult knowledge, we have, at a vast labour and expence, both of time and charges, collected whatsoever can be deemed curious and rare, in regard to the subject of our speculations in Natural Magic--the Cabala--Celestial and Ceremonial Magic--Alchymy--and Magnetism; and have divided it into two Books, sub-divided into Parts: to which we have added a third Book, containing a biographical account of the lives of those great men who were famous and renowned for their knowledge; shewing upon whose authority this Science of Magic is founded, and upon what principles. To which we have annexed a great variety of notes, wherein we have impartially examined the probability of the existence of Magic, both of the good and bad species, in the earliest, as well as in the latter, ages of the world. We have exhibited a vast number of rare experiments in the course of this Treatise, many of which, delivered in the beginning, are founded upon the simple application of actives to passives; the others are of a higher speculation.

In our history of the lives of Philosophers, &c. we have omitted nothing that can be called interesting or satisfactory. We have taken our historical characters from those authors most deserving of credit; we have given an outline of the various reports tradition gives of them; to which are annexed notes, drawn from the most probable appearance of truth, impartially describing their characters and actions; leaning neither to the side of those who doubt every thing, nor to them whose credulity takes in every report to be circumstantially true.

At this time, the abstruse sciences of Nature begin to be more investigated than for a century past, during which space they have been almost totally neglected; but men becoming more enlightened, they begin to consider the extraordinary effects that were wrought by ancient philosophers, in ages that were called dark. Many, therefore, have thought that time, nature, causes, and effects, being the same, with the additional improvements of mechanical and liberal arts, we may, with their knowledge of Nature, surpass them in the producing of wonderful effects; for which cause many men are naturally impelled, without education or other advantage, to dive into the contemplation of Nature; but the study thereof being at first difficult, they have recourse to lay out a great deal of money in collecting various books: to remedy which inconvenience and expence, the Author undertook to compose THE MAGUS, presuming that his labours herein will meet with the general approbation of either the novitiate or adept: for whose use and instruction it is now published.

But to return to the subject of our Book: we have, in the First Part, fully explained what Natural Magic is; and have shewn that, by the application of actives to passives, many wonderful effects are produced that are merely natural, and done by manual operations. We have procured every thing that was valuable and scarce respecting this department of our work, which we have introduced under the title of Natural Magic; and a variety of our own experiments likewise. In the possession of this work, the laborious and diligent student will find a complete and delectable companion; so that he who has been searching for years, for this author and the other, will in this book find the marrow of them all.

But I would advise, that we do not depend too much upon our own wisdom in the understanding of these mysteries; for all earthly wisdom is foolishness in the esteem of God--I mean all the wisdom of man, which he pretends to draw from any other source than God alone.

We come next to the Second Part of our First Book, treating of the art called the Constellatory Practice, or Talismanic Magic; in which we fully demonstrate the power and efficacy of Talismans, so much talked of, and so little understood, by most men: we therefore explain, in the clearest and most intelligible, manner, how Talismans may be made, for the execution of various purposes, and by what means, and from what source they become vivified, and are visible instruments of great and wonderful effects. We likewise shew the proper and convenient times; under what constellations and aspects of the planets they are to be formed, and the times when they are most powerful to act; and, in the next place, we have taught that our own spirit is the vehicle of celestial attraction, transferring celestial and spiritual virtue into Seals, Images, Amulets, Rings, Papers, Glasses, &c. Also, we have not forgot to give the most clear and rational illustration of sympathy and antipathy--attraction and repulsion. We have likewise proved how cures are performed by virtue of sympathetic powers and medicines--by seals, rings, and amulets, even at unlimited distances, which we have been witnesses of and are daily confirmed in the true and certain belief of. We know how to communicate with any person, and to give him intimation of our purpose, at a hundred or a thousand miles distance; but then a preparation is necessary, and the parties should have their appointed seasons and hours for that purpose; likewise, both should be of the same firm constancy of mind, and a disciple or brother in art. And we have given methods whereby a man may receive true and certain intimation of future things (by dreams), of whatsoever his mind has before meditated upon, himself being properly disposed. Likewise, we have recited the various methods used by the antients for the invocation of astral spirits, by circles, crystals, &c.; their forms of exorcism, incantations, orations, bonds, conjurations; and have given a general display of the instruments of their art; all of which we have collected out of the works of the most famous magicians, such as Zoroaster, Hermes, Apollonius, Simon of the Temple, Trithemius, Agrippa, Porta (the Neapolitan), Dee, Paracelsus, Roger Bacon, and a great many others; to which we have subjoined our own notes, endeavouring to point out the difference of these arts, so as to free the name of Magic from any scandalous imputation; seeing it is a word originally significative not of any evil, but of every good and laudable science, such as a man might profit by, and become both wise and happy; and the practice so far from being offensive to God or man, that the very root or ground of all magic takes its rise from the Holy Scriptures, viz.--"The fear of God is the beginning of all wisdom;"--and charity is the end: which fear of God is the beginning of Magic; for Magic is wisdom, and on this account the wise men were called Magi. 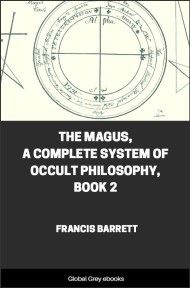 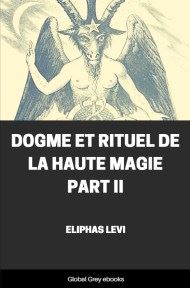