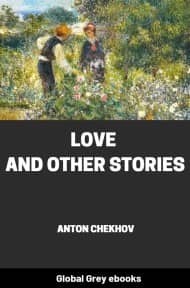 Love and Other Stories

Available in PDF, epub, and Kindle ebook. This book has 119 pages in the PDF version. This is a translation by Constance Garnett.
Series: The Tales of Chekhov #13

Love and Other Stories is the thirteenth and final volume of the Tales of Chekhov, by Russian author Anton Chekhov. A collection of short stories including: Love; Lights; A Story Without An End; Mari D’elle; A Living Chattel; The Doctor; Too Early!; The Cossack; Aborigines; An Inquiry; Martyrs; The Lion And The Sun; A Daughter Of Albion; Choristers; Nerves; A Work Of Art; A Joke; A Country Cottage; A Blunder; Fat And Thin; The Death Of A Government Clerk; A Pink Stocking; and, At A Summer Villa.

Excerpt from Love and Other Stories

“THREE o’clock in the morning. The soft April night is looking in at my windows and caressingly winking at me with its stars. I can’t sleep, I am so happy!

“My whole being from head to heels is bursting with a strange, incomprehensible feeling. I can’t analyse it just now—I haven’t the time, I’m too lazy, and there—hang analysis! Why, is a man likely to interpret his sensations when he is flying head foremost from a belfry, or has just learned that he has won two hundred thousand? Is he in a state to do it?”

This was more or less how I began my love-letter to Sasha, a girl of nineteen with whom I had fallen in love. I began it five times, and as often tore up the sheets, scratched out whole pages, and copied it all over again. I spent as long over the letter as if it had been a novel I had to write to order. And it was not because I tried to make it longer, more elaborate, and more fervent, but because I wanted endlessly to prolong the process of this writing, when one sits in the stillness of one’s study and communes with one’s own day-dreams while the spring night looks in at one’s window. Between the lines I saw a beloved image, and it seemed to me that there were, sitting at the same table writing with me, spirits as naïvely happy, as foolish, and as blissfully smiling as I. I wrote continually, looking at my hand, which still ached deliciously where hers had lately pressed it, and if I turned my eyes away I had a vision of the green trellis of the little gate. Through that trellis Sasha gazed at me after I had said goodbye to her. When I was saying good-bye to Sasha I was thinking of nothing and was simply admiring her figure as every decent man admires a pretty woman; when I saw through the trellis two big eyes, I suddenly, as though by inspiration, knew that I was in love, that it was all settled between us, and fully decided already, that I had nothing left to do but to carry out certain formalities.

It is a great delight also to seal up a love-letter, and, slowly putting on one’s hat and coat, to go softly out of the house and to carry the treasure to the post. There are no stars in the sky now: in their place there is a long whitish streak in the east, broken here and there by clouds above the roofs of the dingy houses; from that streak the whole sky is flooded with pale light. The town is asleep, but already the water-carts have come out, and somewhere in a far-away factory a whistle sounds to wake up the workpeople. Beside the postbox, slightly moist with dew, you are sure to see the clumsy figure of a house porter, wearing a bell-shaped sheepskin and carrying a stick. He is in a condition akin to catalepsy: he is not asleep or awake, but something between.

If the boxes knew how often people resort to them for the decision of their fate, they would not have such a humble air. I, anyway, almost kissed my postbox, and as I gazed at it I reflected that the post is the greatest of blessings.

I beg anyone who has ever been in love to remember how one usually hurries home after dropping the letter in the box, rapidly gets into bed and pulls up the quilt in the full conviction that as soon as one wakes up in the morning one will be overwhelmed with memories of the previous day and look with rapture at the window, where the daylight will be eagerly making its way through the folds of the curtain.

Well, to facts. . . . Next morning at midday, Sasha’s maid brought me the following answer: “I am delited be sure to come to us to day please I shall expect you. Your S.”

Not a single comma. This lack of punctuation, and the misspelling of the word “delighted,” the whole letter, and even the long, narrow envelope in which it was put filled my heart with tenderness. In the sprawling but diffident handwriting I recognised Sasha’s walk, her way of raising her eyebrows when she laughed, the movement of her lips. . . . But the contents of the letter did not satisfy me. In the first place, poetical letters are not answered in that way, and in the second, why should I go to Sasha’s house to wait till it should occur to her stout mamma, her brothers, and poor relations to leave us alone together? It would never enter their heads, and nothing is more hateful than to have to restrain one’s raptures simply because of the intrusion of some animate trumpery in the shape of a half-deaf old woman or little girl pestering one with questions. I sent an answer by the maid asking Sasha to select some park or boulevard for a rendezvous. My suggestion was readily accepted. I had struck the right chord, as the saying is.

Between four and five o’clock in the afternoon I made my way to the furthest and most overgrown part of the park. There was not a soul in the park, and the tryst might have taken place somewhere nearer in one of the avenues or arbours, but women don’t like doing it by halves in romantic affairs; in for a penny, in for a pound—if you are in for a tryst, let it be in the furthest and most impenetrable thicket, where one runs the risk of stumbling upon some rough or drunken man. When I went up to Sasha she was standing with her back to me, and in that back I could read a devilish lot of mystery. It seemed as though that back and the nape of her neck, and the black spots on her dress were saying: Hush! . . . The girl was wearing a simple cotton dress over which she had thrown a light cape. To add to the air of mysterious secrecy, her face was covered with a white veil. Not to spoil the effect, I had to approach on tiptoe and speak in a half whisper.

From what I remember now, I was not so much the essential point of the rendezvous as a detail of it. Sasha was not so much absorbed in the interview itself as in its romantic mysteriousness, my kisses, the silence of the gloomy trees, my vows. . . . There was not a minute in which she forgot herself, was overcome, or let the mysterious expression drop from her face, and really if there had been any Ivan Sidoritch or Sidor Ivanitch in my place she would have felt just as happy. How is one to make out in such circumstances whether one is loved or not? Whether the love is “the real thing” or not? 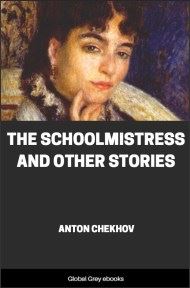 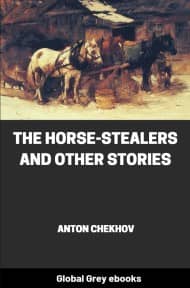 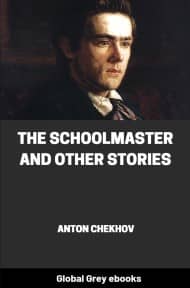 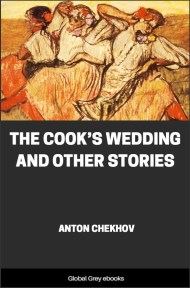 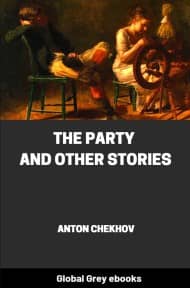