Life is a Dream 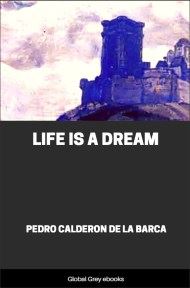 A play regarding the human situation and the mystery of life with the central theme being the conflict between free will and fate. The story focuses on the fictional Segismundo, Prince of Poland, who has been imprisoned in a tower by his father, King Basilio, following a dire prophecy that the prince would bring disaster to the country and death to the King. Basilio briefly frees Segismundo, but when the prince goes on a rampage, the king imprisons him again, persuading him that it was all a dream.

This book has 145 pages in the PDF version. The play originally premiered in 1635. This translation by Denis Florence MacCarthy was published in 1873.

Production notes: This ebook of Life is a Dream was published by Global Grey in 2018.