This book has 185 pages in the PDF version, and was originally published in 1912.

Excerpt from 'Legends of the Gods'

The story of the Creation is supposed to be told by the god Neb-er-tcher, This name means the "Lord to the uttermost limit," and the character of the god suggests that the word "limit" refers to time and space, and that he was, in fact, the Everlasting God of the Universe. This god's name occurs in Coptic texts, and then he appears as one who possesses all the attributes which are associated by modern nations with God Almighty. Where and how Neb-er-tcher existed is not said, but it seems as if he was believed to have been an almighty and invisible power which filled all space. It seems also that a desire arose in him to create the world, and in order to do this he took upon himself the form of the god Khepera, who from first to last was regarded as the Creator, par excellence, among all the gods known to the Egyptians. When this transformation of Neb-er-tcher into Khepera took place the heavens and the earth had not been created, but there seems to have existed a vast mass of water, or world-ocean, called Nu, and it must have been in this that the transformation took place. In this celestial ocean were the germs of all the living things which afterwards took form in heaven and on earth, but they existed in a state of inertness and helplessness. Out of this ocean Khepera raised himself, and so passed from a state of passiveness and inertness into one of activity. When Khepera raised himself out of the ocean Nu, he found himself in vast empty space, wherein was nothing on which he could stand. The second version of the legend says that Khepera gave being to himself by uttering his own name, and the first version states that he made use of words in providing himself with a place on which to stand. In other words, when Khepera was still a portion of the being of Neb-er-tcher, he spake the word "Khepera," and Khepera came into being. Similarly, when he needed a place whereon to stand, he uttered the name of the thing, or place, on which he wanted to stand, and that thing, or place, came into being. This spell he seems to have addressed to his heart, or as we should say, will, so that Khepera willed this standing-place to appear, and it did so forthwith. The first version only mentions a heart, but the second also speaks of a heart-soul as assisting Khepera in his first creative acts; and we may assume that he thought out in his heart what manner of thing be wished to create, and then by uttering its name caused his thought to take concrete form. This process of thinking out the existence of things is expressed in Egyptian by words which mean "laying the foundation in the heart."

In arranging his thoughts and their visible forms Khepera was assisted by the goddess Maat, who is usually regarded as the goddess of law, order, and truth, and in late times was held to be the female counterpart of Thoth, "the heart of the god Ra." In this legend, however, she seems to play the part of Wisdom, as described in the Book of Proverbs, for it was by Maat that he "laid the foundation."

Having described the coming into being of Khepera and the place on which he stood, the legend goes on to tell of the means by which the first Egyptian triad, or trinity, came into existence. Khepera had, in some form, union with his own shadow, and so begot offspring, who proceeded from his body under the forms of the gods Shu and Tefnut. According to a tradition preserved in the Pyramid Texts this event took place at On (Heliopolis), and the old form of the legend ascribes the production of Shu and Tefnut to an act of masturbation. Originally these gods were the personifications of air and dryness, and liquids respectively; thus with their creation the materials for the construction of the atmosphere and sky came into being. Shu and Tefnut were united, and their offspring were Keb, the Earth-god, and Nut, the Sky-goddess. We have now five gods in existence; Khepera, the creative principle, Shu, the atmosphere, Tefnut, the waters above the heavens, Nut, the Sky-goddess, and Keb, the Earth-god. Presumably about this time the sun first rose out of the watery abyss of Nu, and shone upon the world and produced day. In early times the sun, or his light, was regarded as a form of Shu. The gods Keb and Nut were united in an embrace, and the effect of the coming of light was to separate them. As long as the sun shone, i.e., as long as it was day, Nut, the Sky-goddess, remained in her place above the earth, being supported by Shu; but as soon as the sun set she left the sky and gradually descended until she rested on the body of the Earth-god, Keb.

The embraces of Keb caused Nut to bring forth five gods at a birth, namely, Osiris, Horus, Set, Isis, and Nephthys. Osiris and Isis married before their birth, and Isis brought forth a son called Horus; Set and Nephthys also married before their birth, and Nephthys brought forth a son named Anpu (Anubis), though he is not mentioned in the legend. Of these gods Osiris is singled out for special mention in the legend, in which Khepera, speaking as Neb-er-tcher, says that his name is AUSARES, who is the essence of the primeval matter of which he himself is formed. Thus Osiris was of the same substance as the Great God who created the world according to the Egyptians, and was a reincarnation of his great-grandfather. This portion of the legend helps to explain the views held about Osiris as the great ancestral spirit, who when on earth was a benefactor of mankind, and who when in heaven was the saviour of souls.

The legend speaks of the sun as the Eye of Khepera, or Neb-er-tcher, and refers to some calamity which befell it and extinguished its light. This calamity may have been simply the coming of night, or eclipses, or storms; but in any case the god made a second Eye, i.e., the Moon, to which he gave some of the splendour of the other Eye, i.e., the Sun, and he gave it a place in his Face, and henceforth it ruled throughout the earth, and had special powers in respect of the production of trees, plants, vegetables, herbs, etc. Thus from the earliest times the moon was associated with the fertility of the earth, especially in connection with the production of abundant crops and successful harvests. 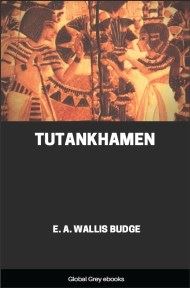 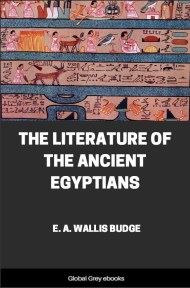 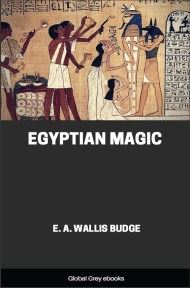 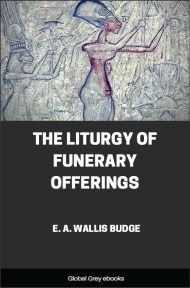 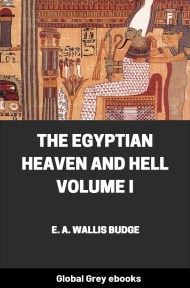