The Golden Chain of Homer 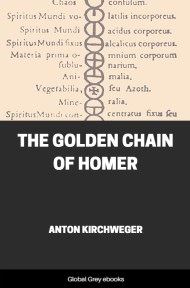 The Golden Chain of Homer, in its various forms and editions, is perhaps one of the most descriptive and least ambiguous manuscripts on alchemical lore and the early explanations given during the late Renaissance and early Enlightenment periods regarding chemical and earthly processes. Less concerned with celestial and angelic symbolism and more focused on outright experimentation, it covers the processes of fixation, putrefaction, and generation in far more depth than most works of the era.

This book has 56 pages in the PDF version.

Production notes: This ebook of The Golden Chain of Homer was published by Global Grey in 2019.