This is William Skene's anthology of dark-age Welsh Bardic poetry. Often cited, but difficult to obtain, this book contains every remaining piece of Bardic poetry known. The poems are translated from four manuscripts: the Black Book of Caermarthen, the Red Book of Hergest (which is also the source of the Mabinogion), the Book of Taliessin and the Book of Aneurin, all of which date from the twelfth to the fifteenth centuries C.E. The poems themselves date from much earlier, probably from the sixth century by internal evidence. This corpus is one of the treasures of world literature. It is also the only true source material for the study of Bardic lore, which reputedly preserved the esoteric (and long-lost) beliefs of the Druids. The poems are infused throughout with mystic clarity, strange flashes of wisdom, and insight into humanity and nature.

This book has 524 pages in the PDF version, and was originally published in 1868.

Production notes: This e-book of The Four Ancient Books of Wales was published by Global Grey on the 9th May 2018. 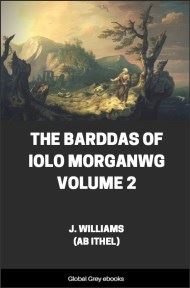