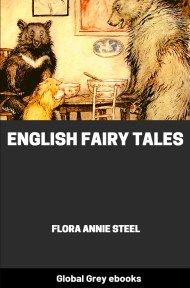 Available in PDF, epub, and Kindle ebook, or read online. This book has 241 pages in the PDF version, and was originally published in 1922.

A collection of 41 English fairy tales by Flora Annie Steel, first published in 1922. Fairy tales include: St. George Of Merrie England; The Story Of The Three Bears; Tom-Tit-Tot; The Golden Snuff-Box; Tattercoats; The Three Feathers; Lazy Jack; Jack The Giant-Killer; The Three Sillies; The Golden Ball; The Two Sisters; The Laidly Worm; Titty Mouse And Tatty Mouse; Jack And The Beanstalk; The Black Bull Of Norroway; Catskin; The Three Little Pigs; Nix Naught Nothing; Mr. And Mrs. Vinegar; The True History Of Sir Thomas Thumb; Henny-Penny; The Three Heads Of The Well; Mr. Fox; Dick Whittington And His Cat; The Old Woman And Her Pig; The Wee Bannock; How Jack Went Out To Seek His Fortune; The Bogey-Beast; Little Red Riding-Hood; Childe Rowland; The Wise Men Of Gotham; Caporushes; The Babes In The Wood; The Red Ettin; The Fish And The Ring; Lawkamercyme; Master Of All Masters; Molly Whuppie And The Double-Faced Giant; The Ass, The Table, And The Stick; The Well Of The World's End; and, The Rose Tree.

Last week, around 32,000 people downloaded books from my site - 8 people gave donations. These books can take me from 2 to 10 hours to create. I want to keep them free, but need some support to be able to do so. If you can, please make a small donation using the PayPal or Stripe button below (average donation is £2.50). You can also support the site by buying a collection, such as the Folk-Lore and Mythology one, with 150 ebooks for only £10.00

Curious Myths of the Middle Ages