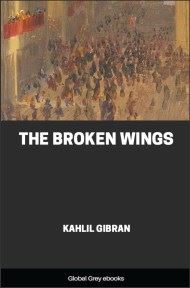 A novel written by Kahlil Gibran and first published in Arabic in 1912. It is a tale of tragic love, set in turn-of-the-century Beirut. A young woman, Selma Karamy is betrothed to a prominent religious man's nephew. The protagonist, a young man, falls in love with this woman. They begin to meet in secret, however they are discovered, and Selma is forbidden to leave her house, breaking their hopes and hearts. The book highlights many of the social issues of the time in the Eastern Mediterranean, including religious corruption, the rights of women (and lack thereof), and the weighing up of wealth and happiness.

This book has 55 pages in the PDF version, and was originally published in 1912.

Production notes: This ebook of The Broken Wings was published by Global Grey in 2018.