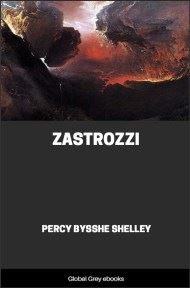 Zastrozzi is a gothic novel by English Romantic poet Percy Bysshe Shelley, first published anonymously in 1810. It is the story of the villain Pietro Zastrozzi who plans to take revenge on his half-brother Verezzi because their father left Zastrozzi's mother in poverty, leading to her death at a young age. He abducts Verezzi who manages to escape. However, Zastrozzi's horrific plans take a different twist and leads to tragedy all round. When the book was first published, the title character led one reviewer to say 'Zastrozzi is one of the most savage and improbable demons that ever issued from a diseased brain'.

This was Shelley's first published novel and one of two that outlined his atheistic worldview.

This book has 101 pages in the PDF version, and was originally published in 1810.

Production notes: This ebook of Zastrozzi was published by Global Grey on the 1st August 2018.