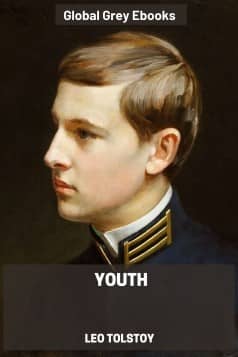 Youth is the third and final book in Leo Tolstoy's semi-autobiographical novels, following Childhood, and Boyhood. It was first published in the Russian magazine Sovremennik in 1857 and along with the previous two, were Tolstoy's earliest works. Later in his life, he claimed he was unhappy with the last two in the trilogy, stating that they were too sentimental. In Youth, Tolstoy writes about his first year at college, his relationships with his professors and with fellow students, the challenges he faces, and the facts that he comes to realise about equality.

This book has 125 pages in the PDF version, and was originally published in 1857. This is a translation by Charles James Hogarth.

Production notes: This ebook of Youth was published by Global Grey on the 8th October 2021. The artwork used for the cover is 'Portrait of Henryk Józef Sienkiewicz' by Kazimierz Mordasewicz.