The Years is a 1937 novel by Virginia Woolf, and was the last one to be published in her lifetime. Just 4 years later, she would take her own life after suffering mental health problems since she was a young teenager. The Years tells the story and history of the Pargiter family, spanning fifty years and focusing on the details of the characters' lives. Most of the sections in the book take place on a single day in a year.

This book has 284 pages in the PDF version, and was originally published in 1937.

Excerpt from 'The Years'

It was an uncertain spring. The weather, perpetually changing, sent clouds of blue and of purple flying over the land. In the country farmers, looking at the fields, were apprehensive; in London umbrellas were opened and then shut by people looking up at the sky. But in April such weather was to be expected. Thousands of shop assistants made that remark, as they handed neat parcels to ladies in flounced dresses standing on the other side of the counter at Whiteley's and the Army and Navy Stores. Interminable processions of shoppers in the West end, of business men in the East, paraded the pavements, like caravans perpetually marching,--so it seemed to those who had any reason to pause, say, to post a letter, or at a club window in Piccadilly. The stream of landaus, victorias and hansom cabs was incessant; for the season was beginning. In the quieter streets musicians doled out their frail and for the most part melancholy pipe of sound, which was echoed, or parodied, here in the trees of Hyde Park, here in St. James's by the twitter of sparrows and the sudden outbursts of the amorous but intermittent thrush. The pigeons in the squares shuffled in the tree tops, letting fall a twig or two, and crooned over and over again the lullaby that was always interrupted. The gates at the Marble Arch and Apsley House were blocked in the afternoon by ladies in many-coloured dresses wearing bustles, and by gentlemen in frock coats carrying canes, wearing carnations. Here came the Princess, and as she passed hats were lifted. In the basements of the long avenues of the residential quarters servant girls in cap and apron prepared tea. Deviously ascending from the basement the silver teapot was placed on the table, and virgins and spinsters with hands that had staunched the sores of Bermondsey and Hoxton carefully measured out one, two, three, four spoonfuls of tea. When the sun went down a million little gaslights, shaped like the eyes in peacocks' feathers, opened in their glass cages, but nevertheless broad stretches of darkness were left on the pavement. The mixed light of the lamps and the setting sun was reflected equally in the placid waters of the Round Pond and the Serpentine. Diners-out, trotting over the Bridge in hansom cabs, looked for a moment at the charming vista. At length the moon rose and its polished coin, though obscured now and then by wisps of cloud, shone out with serenity, with severity, or perhaps with complete indifference. Slowly wheeling, like the rays of a searchlight, the days, the weeks, the years passed one after another across the sky.

Colonel Abel Pargiter was sitting after luncheon in his club talking. Since his companions in the leather armchairs were men of his own type, men who had been soldiers, civil servants, men who had now retired, they were reviving with old jokes and stories now their past in India, Africa, Egypt, and then, by a natural transition, they turned to the present. It was a question of some appointment, of some possible appointment.

Suddenly the youngest and the sprucest of the three leant forward. Yesterday he had lunched with . . . Here the voice of the speaker fell. The others bent towards him; with a brief wave of his hand Colonel Abel dismissed the servant who was removing the coffee cups. The three baldish and greyish heads remained close together for a few minutes. Then Colonel Abel threw himself back in his chair. The curious gleam which had come into all their eyes when Major Elkin began his story had faded completely from Colonel Pargiter's face. He sat staring ahead of him with bright blue eyes that seemed a little screwed up, as if the glare of the East were still in them; and puckered at the corners as if the dust were still in them. Some thought had struck him that made what the others were saying of no interest to him; indeed, it was disagreeable to him. He rose and looked out of the window down into Piccadilly. Holding his cigar suspended he looked down on the tops of omnibuses, hansom cabs, victorias, vans and landaus. He was out of it all, his attitude seemed to say; he had no longer any finger in that pie. Gloom settled on his red handsome face as he stood gazing. Suddenly a thought struck him. He had a question to ask; he turned to ask it; but his friends were gone. The little group had broken up. Elkins was already hurrying through the door; Brand had moved off to talk to another man. Colonel Pargiter shut his mouth on the thing he might have said, and turned back again to the window overlooking Piccadilly. Everybody in the crowded street, it seemed, had some end in view. Everybody was hurrying along to keep some appointment. Even the ladies in their victorias and broughams were trotting down Piccadilly on some errand or other. People were coming back to London; they were settling in for the season. But for him there would be no season; for him there was nothing to do. His wife was dying; but she did not die. She was better today; would be worse tomorrow; a new nurse was coming; and so it went on. He picked up a paper and turned over the pages. He looked at a picture of the west front of Cologne Cathedral. He tossed the paper back into its place among the other papers. One of these days--that was his euphemism for the time when his wife was dead--he would give up London, he thought, and live in the country. But then there was the house; then there were the children; and there was also . . . his face changed; it became less discontented; but also a little furtive and uneasy.

He had somewhere to go, after all. While they were gossiping he had kept that thought at the back of his mind. When he turned round and found them gone, that was the balm he clapped on his wound. He would go and see Mira; Mira at least would be glad to see him. Thus when he left the club he turned not East, where the busy men were going; nor West where his own house in Abercorn Terrace was; but took his way along the hard paths through the Green Park towards Westminster. The grass was very green; the leaves were beginning to shoot; little green claws, like birds' claws, were pushing out from the branches; there was a sparkle, an animation everywhere; the air smelt clean and brisk. But Colonel Pargiter saw neither the grass nor the trees. He marched through the Park, in his closely buttoned coat, looking straight ahead of him. But when he came to Westminster he stopped. He did not like this part of the business at all. Every time he approached the little street that lay under the huge bulk of the Abbey, the street of dingy little houses, with yellow curtains and cards in the window, the street where the muffin man seemed always to be ringing his bell, where children screamed and hopped in and out of white chalk-marks on the pavement, he paused, looked to the right, looked to the left; and then walked very sharply to Number Thirty and rang the bell. He gazed straight at the door as he waited with his head rather sunk. He did not wish to be seen standing on that door-step. He did not like waiting to be let in. He did not like it when Mrs Sims let him in. There was always a smell in the house; there were always dirty clothes hanging on a line in the back garden. He went up the stairs, sulkily and heavily, and entered the sitting-room. 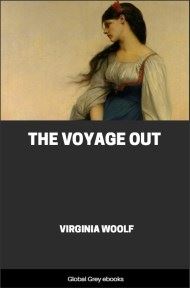 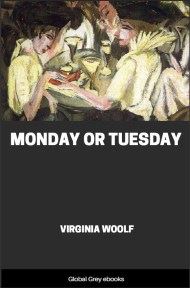