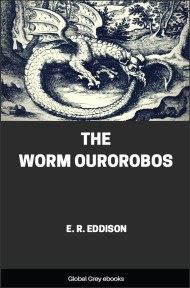 The Worm Ouroboros is a heroic high fantasy novel by Eric Rücker Eddison, first published in 1922. The book describes the protracted war between the domineering King Gorice of Witchland and the Lords of Demonland in an imaginary world that appears mainly medieval and partly reminiscent of Norse sagas.

This book has 456 pages in the PDF version, and was originally published in 1922.

Production notes: This ebook of The Worm Ourorobos was published by Global Grey in 2018.