A collection of stories, including: What Is Man?; The Death Of Jean; The Turning-Point Of My Life; How To Make History Dates Stick; The Memorable Assassination; A Scrap Of Curious History; Switzerland, The Cradle Of Liberty; At The Shrine Of St. Wagner; William Dean Howells; English As She Is Taught; A Simplified Alphabet; As Concerns Interpreting The Deity; Concerning Tobacco; The Bee; Taming The Bicycle; and, Is Shakespeare Dead?

This book has 260 pages in the PDF version, and was originally published in 1906.

Excerpt from 'What Is Man? And Other Stories'

To me, the most important feature of my life is its literary feature. I have been professionally literary something more than forty years. There have been many turning-points in my life, but the one that was the last link in the chain appointed to conduct me to the literary guild is the most CONSPICUOUS link in that chain. BECAUSE it was the last one. It was not any more important than its predecessors. All the other links have an inconspicuous look, except the crossing of the Rubicon; but as factors in making me literary they are all of the one size, the crossing of the Rubicon included.

I know how I came to be literary, and I will tell the steps that lead up to it and brought it about.

The crossing of the Rubicon was not the first one, it was hardly even a recent one; I should have to go back ages before Caesar's day to find the first one. To save space I will go back only a couple of generations and start with an incident of my boyhood. When I was twelve and a half years old, my father died. It was in the spring. The summer came, and brought with it an epidemic of measles. For a time a child died almost every day. The village was paralyzed with fright, distress, despair. Children that were not smitten with the disease were imprisoned in their homes to save them from the infection. In the homes there were no cheerful faces, there was no music, there was no singing but of solemn hymns, no voice but of prayer, no romping was allowed, no noise, no laughter, the family moved spectrally about on tiptoe, in a ghostly hush. I was a prisoner. My soul was steeped in this awful dreariness—and in fear. At some time or other every day and every night a sudden shiver shook me to the marrow, and I said to myself, "There, I've got it! and I shall die." Life on these miserable terms was not worth living, and at last I made up my mind to get the disease and have it over, one way or the other. I escaped from the house and went to the house of a neighbor where a playmate of mine was very ill with the malady. When the chance offered I crept into his room and got into bed with him. I was discovered by his mother and sent back into captivity. But I had the disease; they could not take that from me. I came near to dying. The whole village was interested, and anxious, and sent for news of me every day; and not only once a day, but several times. Everybody believed I would die; but on the fourteenth day a change came for the worse and they were disappointed.

This was a turning-point of my life. (Link number one.) For when I got well my mother closed my school career and apprenticed me to a printer. She was tired of trying to keep me out of mischief, and the adventure of the measles decided her to put me into more masterful hands than hers.

I became a printer, and began to add one link after another to the chain which was to lead me into the literary profession. A long road, but I could not know that; and as I did not know what its goal was, or even that it had one, I was indifferent. Also contented.

A young printer wanders around a good deal, seeking and finding work; and seeking again, when necessity commands. N. B. Necessity is a CIRCUMSTANCE; Circumstance is man's master—and when Circumstance commands, he must obey; he may argue the matter—that is his privilege, just as it is the honorable privilege of a falling body to argue with the attraction of gravitation—but it won't do any good, he must OBEY. I wandered for ten years, under the guidance and dictatorship of Circumstance, and finally arrived in a city of Iowa, where I worked several months. Among the books that interested me in those days was one about the Amazon. The traveler told an alluring tale of his long voyage up the great river from Para to the sources of the Madeira, through the heart of an enchanted land, a land wastefully rich in tropical wonders, a romantic land where all the birds and flowers and animals were of the museum varieties, and where the alligator and the crocodile and the monkey seemed as much at home as if they were in the Zoo. Also, he told an astonishing tale about COCA, a vegetable product of miraculous powers, asserting that it was so nourishing and so strength-giving that the native of the mountains of the Madeira region would tramp up hill and down all day on a pinch of powdered coca and require no other sustenance.

I was fired with a longing to ascend the Amazon. Also with a longing to open up a trade in coca with all the world. During months I dreamed that dream, and tried to contrive ways to get to Para and spring that splendid enterprise upon an unsuspecting planet. But all in vain. A person may PLAN as much as he wants to, but nothing of consequence is likely to come of it until the magician CIRCUMSTANCE steps in and takes the matter off his hands. At last Circumstance came to my help. It was in this way. Circumstance, to help or hurt another man, made him lose a fifty-dollar bill in the street; and to help or hurt me, made me find it. I advertised the find, and left for the Amazon the same day. This was another turning-point, another link.

Could Circumstance have ordered another dweller in that town to go to the Amazon and open up a world-trade in coca on a fifty-dollar basis and been obeyed? No, I was the only one. There were other fools there—shoals and shoals of them—but they were not of my kind. I was the only one of my kind. 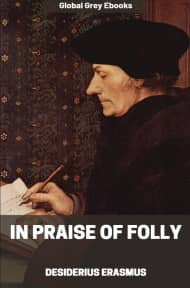