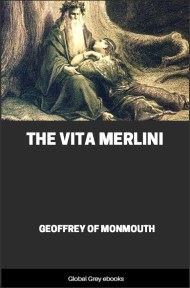 The Vita Merlini, or The Life of Merlin, is a work by the Norman-Welsh author Geoffrey of Monmouth, composed in Latin around AD 1150. It retells incidents from the life of the Brythonic seer Merlin, and is based on traditional material about him. Merlin is described as a prophet in the text. There are a number of episodes in which he loses his mind and lives in the wilderness like a wild animal, like Nebuchadnezzar in the Book of Daniel, or the Welsh wild man of the woods. It is also the first work to describe the Arthurian sorceress Morgan le Fay, as Morgen.

This book has 84 pages in the PDF version. This edition was originally published in 1925.

Production notes: This ebook of The Vita Merlini was published by Global Grey in 2018.