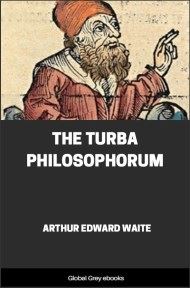 The Turba Philosophorum, also known as the Assembly of the Philosophers, is one of the oldest European alchemy texts. It is considered to have been written c. 900 A.D. Nine philosophers take part in a discussion, being, once the text has been transcribed back to the original Arabic, Anaximander, Anximenes, Anaxagoras, Empedocles, Archelaus, Leucippus, Ecphantus, Pythagoras and Xenophanes. The statements of the philosophers, whilst usually different from the known beliefs of the pre-Socratics, are usually recognisable as outgrowths of Greek philosophy. They discuss matter, how it acts, and relate this to cosmology, with three theses presented by Xenophanes in his closing speech, being, 1) The creator of the World is Allah, the God of Islam; 2) The world is of a uniform nature; 3) All creatures of the upper as well as of the lower world are composed of all four elements.

This book has 74 pages in the PDF version, and was originally published in 1896.

Production notes: This ebook of The Turba Philosophorum was published by Global Grey in 2018.