A collection of short stories by the popular and influential Russian author, a founder of the socialist realism literary method and arguably the greatest Russian literary figure of the 20th century.

This book has 302 pages in the PDF version, and was originally published in 1923.

Excerpt from 'Through Russia'

The year was the year ‘92 — the year of leanness — the scene a spot between Sukhum and Otchenchiri, on the river Kodor, a spot so near to the sea that amid the joyous babble of a sparkling rivulet the ocean’s deep-voiced thunder was plainly distinguishable.

Also, the season being autumn, leaves of wild laurel were glistening and gyrating on the white foam of the Kodor like a quantity of mercurial salmon fry. And as I sat on some rocks overlooking the river there occurred to me the thought that, as likely as not, the cause of the gulls’ and cormorants’ fretful cries where the surf lay moaning behind a belt of trees to the right was that, like myself, they kept mistaking the leaves for fish, and as often finding themselves disappointed.

Over my head hung chestnut trees decked with gold; at my feet lay a mass of chestnut leaves which resembled the amputated palms of human hands; on the opposite bank, where there waved, tanglewise, the stripped branches of a hornbeam, an orange-tinted woodpecker was darting to and fro, as though caught in the mesh of foliage, and, in company with a troupe of nimble titmice and blue tree-creepers (visitors from the far-distant North), tapping the bark of the stem with a black beak, and hunting for insects.

To the left, the tops of the mountains hung fringed with dense, fleecy clouds of the kind which presages rain; and these clouds were sending their shadows gliding over slopes green and overgrown with boxwood and that peculiar species of hollow beech-stump which once came near to effecting the downfall of Pompey’s host, through depriving his iron-built legions of the use of their legs as they revelled in the intoxicating sweetness of the “ mead “ or honey which wild bees make from the blossoms of the laurel and the azalea, and travellers still gather from those hollow stems to knead into lavashi or thin cakes of millet flour.

On the present occasion I too (after suffering sundry stings from infuriated bees) was thus engaged as I sat on the rocks beneath the chestnuts. Dipping morsels of bread into a potful of honey, I was munching them for breakfast, and enjoying, at the same time, the indolent beams of the moribund autumn sun.

In the fall of the year the Caucasus resembles a gorgeous cathedral built by great craftsmen (always great craftsmen are great sinners) to conceal their past from the prying eyes of conscience. Which cathedral is a sort of intangible edifice of gold and turquoise and emerald, and has thrown over its hills rare carpets silk-embroidered by Turcoman weavers of Shemi and Samarkand, and contains, heaped everywhere, plunder brought from all the quarters of the world for the delectation of the sun. Yes, it is as though men sought to say to the Sun God: “ All things here are thine. They have been brought hither for thee by thy people.”

Yes, mentally I see long-bearded, grey-headed supermen, beings possessed of the rounded eyes of happy children, descending from the hills, and decking the earth, and sowing it with sheerly kaleidoscopic treasures, and coating the tops of the mountains with massive layers of silver, and the lower edges with a living web of trees. Yes, I see those beings decorating and fashioning the scene until, thanks to their labours, this gracious morsel of the earth has become fair beyond all conception.

And what a privilege it is to be human! How much that is wonderful leaps to the eye-how the presence of beauty causes. the heart to throb with a voluptuous rapture that is almost pain!

And though there are occasions when life seems hard, and the breast feels filled with fiery rancour, and melancholy dries and renders athirst the heart’s blood, this is not a mood sent us in perpetuity. For at times even the sun may feel sad as he contemplates men, and sees that, despite all that he has done for them, they have done so little in return . . . .

No, it is not that good folk are lacking. It is that they need to be rounded off — better still, to be made anew.

Suddenly there came into view over the bushes to my left a file of dark heads, while through the surging of the waves and the babble of the stream I caught the sound of human voices, a sound emanating from a party of “ famine people “ or folk who were journeying from Sukhum to Otchenchiri to obtain work on a local road then in process of construction.

The owners of the voices I knew to be immigrants from the province of Orlov. I knew them to be so for the reason that I myself had lately been working in company with the male members of the party, and had taken leave of them only yesterday in order that I might set out earlier than they, and, after walking through the night, greet the sun when he should arise above the sea.

The members of the party comprised four men and a woman — the latter a young female with high cheek-bones, a figure swollen with manifest pregnancy, and a pair of greyish-blue eyes that had fixed in them a stare of apprehension. At the present moment her head and yellow scarf were just showing over the tops of the bushes; and while I noted that now it was swaying from side to side like a sunflower shaken by the wind, I recalled the fact that she was a woman whose husband had been carried off at Sukhum by a surfeit of fruit — this fact being known to me through the circumstance that in the workmen’s barraque where we had shared quarters these folk had observed the good old Russian custom of confiding to a stranger the whole of their troubles, and had done so in tones of such amplitude and penetration that the querulous words must have been audible for five versts around. 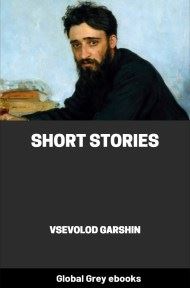 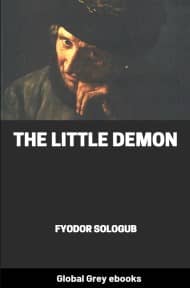