The Theogony of Hesiod 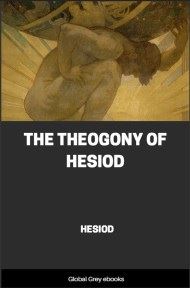 The Theogony Of Hesiod is a poem describing the origins and genealogies of the Greek gods, composed circa 700 BC. In formal terms it is a hymn invoking Zeus and the Muses: parallel passages between it and the much shorter Homeric Hymn to the Muses make it clear that the Theogony developed out of a tradition of hymnic preludes with which an ancient Greek rhapsode would begin his performance at poetic competitions.

This book has 27 pages in the PDF version. This translation by Hugh G. Evelyn White was originally published in 1914.

Production notes: This ebook of The Theogony of Hesiod was published by Global Grey in 2018.