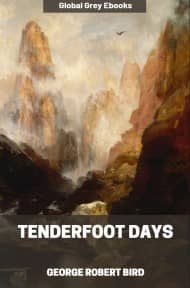 This is a memoir by a non-Mormon about his experiences in the prospecting camps of Utah at the turn of the 19th century. Written as a first-person perspective by an outsider, it gives a sympathetic account of the Mormons, but also brings up some darker aspects about their history. It's also pretty racist towards Native Americans, so, as always with these old books, please bear in mind the context and the era in which it was written. The book has 20 chapters including: Going West In 1874; A Far West City; Pilgrims To A Modern Zion; Church, State And Camp; The Co-Operative Industry Of Utah; Through Spanish Fork Canyon And Thistle Valley; Opposition To The Liberal Schools; The Town And Canyon Of American Fork; and more.

This book has 94 pages in the PDF version, and was originally published in 1918.

Production notes: This ebook of Tenderfoot Days was published by Global Grey ebooks on the 14th January 2021. The artwork used for the cover is 'Mist in Kanab Canyon, Utah' by Thomas Moran.