A collection of articles from Lucifer, H. P. Blavatsky's magazine, published between 1887-1891. Chapters include: Practical Occultism; Occultism versus the Occult Arts; The Blessings of Publicity; Hypnotism; Black Magic in Science; The Signs of the Times; Psychic and Noetic Action; Kosmic Mind; The Dual Aspect of Wisdom; The Esoteric Character of the Gospels; Astral Bodies, or Doppelgangers; and, Constitution of the Inner Man.

Excerpt from 'Studies in Occultism'

Their representations of the powers it confers on upon man, and of the means to be used to acquire them are as varied as they are fanciful. Some imagine that a master in the art, to show the way, is all that is needed to become a Zanoni. Others, that one has but to cross the Canal of Suez and go to India to bloom forth as Roger Bacon or even a Count St. Germain. Many take for their ideal Margrave with his ever-renewing youth, and care little for the soul as the price paid for it. Not a few, mistaking "Witch-of-Endorism" pure and simple, for Occultism — "through the yawning Earth from Stygian gloom, call up the meager ghost to walks of light," and want, on the strength of this feat, to be regarded as full-blown Adepts. "Ceremonial Magic" according to the rules mockingly laid down by Eliphas Levi, is another imagined alter-ego of the philosophy of the Arhats of old. In short, the prisms through which Occultism appears, to those innocent of the philosophy, are as multicolored and varied as human fancy can make them.

Will these candidates to Wisdom and Power feel very indignant if told the plain truth? It is not only useful, but it has now become necessary to disabuse most of them and before it is too late. This truth may be said in a few words: There are not in the West half-a-dozen among the fervent hundreds who call themselves "Occultists," who have even an approximately correct idea of the nature of the Science they seek to master. With a few exceptions, they are all on the highway to Sorcery. Let them restore some order in the chaos that reigns in their minds, before they protest against this statement. Let them first learn the true relation in which the Occult Sciences stand to Occultism, and the difference between the two, and then feel wrathful if they still think themselves right. Meanwhile, let them learn that Occultism differs from Magic and other secret Sciences as the glorious sun does from a rush-light, as the immutable and immortal Spirit of Man — the reflection of the absolute, causeless and unknowable ALL — differs from the mortal clay — the human body.

In our highly civilized West, where modern languages have been formed, and words coined, in the wake of ideas and thoughts — as happened with every tongue — the more the latter became materialized in the cold atmosphere of Western selfishness and its incessant chase after the goods of this world, the less was there any need felt for the production of new terms to express that which was tacitly regarded as absolute and exploded "superstition." Such words could answer only to ideas which a cultured man was scarcely supposed to harbor in his mind. "Magic," a synonym for jugglery, "Sorcery," an equivalent for crass ignorance, and "Occultism," the sorry relic of crack-brained, mediaeval Fire-philosophers, of the Jacob Boehmes and the St. Martins, are expressions believed more than amply sufficient to cover the whole field of "thimble-rigging." They are terms of contempt, and used generally only in reference to the dross and residues of the dark ages and the preceding aeons of paganism. Therefore have we no terms in the English tongue to define and shade the difference between such abnormal powers, or the sciences that lead to the acquisition of them, with the nicety possible in the Eastern languages — pre-eminently the Sanskrit. What do the words "miracle" and "enchantment" (words identical in meaning after all, as both express the idea of producing wonderful things by breaking the laws of nature [!!] as explained by the accepted authorities) convey to the minds of those who hear, or pronounce them? A Christian — breaking "of the laws of nature," notwithstanding — while believing firmly in the miracles, because said to have been produced by God through Moses, will either scout the enchantments performed by Pharaoh's magicians, or attribute them to the devil. It is the latter whom our pious enemies connect with Occultism, while their impious foes, the infidels, laugh at Moses, Magicians and Occultists, and would blush to give one serious thought to such "superstitions." This, because there is no term in existence to show the difference; no words to express the lights and shadows and draw the line of demarcation between the sublime and the true, the absurd and the ridiculous. The latter are the theological interpretations which teach the "breaking of the laws of Nature" by man, God, or devil; the former — the scientific "miracles" and enchantments of Moses and the Magicians in accordance with natural laws, both having been learned in all the Wisdom of the Sanctuaries, which were the "Royal Societies" of those days — and in true OCCULTISM. This last word is certainly misleading, translated as it stands from the compound word Gupta-Vidya, "Secret Knowledge." But the knowledge of what? Some of the Sanskrit terms may help us.

There are four (out of the many others) names of the various kinds of Esoteric Knowledge or Sciences given, even in the exoteric Puranas. There is (1) Yajna-Vidya, knowledge of the occult powers awakened in Nature by the performance of certain religious ceremonies and rites. (2)Mahavidya, the "great knowledge," the magic of the Kabalists and the Tantrika worship, often Sorcery of the worst description. (3) Guhya-Vidya, knowledge of the mystic powers residing in Sound (Ether), hence in the Mantras (chanted prayers or incantations) and depending on the rhythm and melody used; in other words, a magical performance based on Knowledge of the forces of Nature and their correlation; and (4) ATMA-VIDYA, a term which is translated simply "Knowledge of the Soul," true Wisdom by the Orientalists, but which means far more.

This last is the only kind of Occultism that any theosophist who admires "Light on the Path," and who would be wise and unselfish, ought to strive after. All the rest is some branch of the "Occult Sciences,", i.e. arts based on the knowledge of the ultimate essence of all things in the Kingdoms of Nature — such as minerals, plants and animals — hence of things pertaining to the realm of material nature, however invisible that essence may be, and howsoever much it has hitherto eluded the grasp of Science. Alchemy, Astrology, Occult Physiology, Chiromancy, exist in Nature and the exact Sciences — perhaps so called, because they are found in this age of paradoxical philosophies the reverse — have already discovered not a few of the secrets of the above arts. But clairvoyance, symbolized in India as the "Eye of Siva," called in Japan, "Infinite Vision," is not Hypnotism, the illegitimate son of Mesmerism, and is not to be acquired by such arts. All the others may be mastered and results obtained, whether good, bad, or indifferent; but Atma-Vidya sets small value on them. It includes them all and may even use them occasionally, but it does so after purifying them of their dross, for beneficent purposes, and taking care to deprive them of every element of selfish motive. Let us explain: Any man or woman can set himself or herself to study one or all of the above specified "Occult Arts" without any great previous preparation, and even without adopting any too restraining mode of life. One could even dispense with any lofty standard of morality. 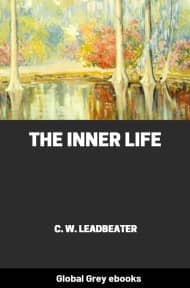