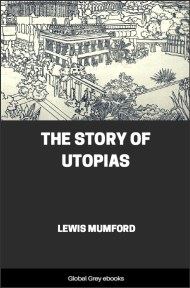 This is a survey of the development of the concept of Utopia, by one of the foremost urban planning theorists of the 20th century. This was Mumford's first book. He starts with a survey of the major utopias, some well-known, others less so. We look at Plato's Republic, More's Utopia, Andreæ's Christanopolis, Bacon's New Atlantis, Campanella's City of the Sun, Fourier's Phalanxes, Cabet's Icaria, Bellamy's Looking Backward, Morris' News from Nowhere, and finally H. G. Wells' utopian fiction. In the final portion of the book Mumford explores the prospects for Utopia and relates it to the realities of urban planning. Mumford's prose style is engaging and this is a great introduction to this fascinating subject.

This book has 204 pages in the PDF version, and was originally published in 1922.

Production notes: This ebook of The Story of Utopias was published by Global Grey in 2018.